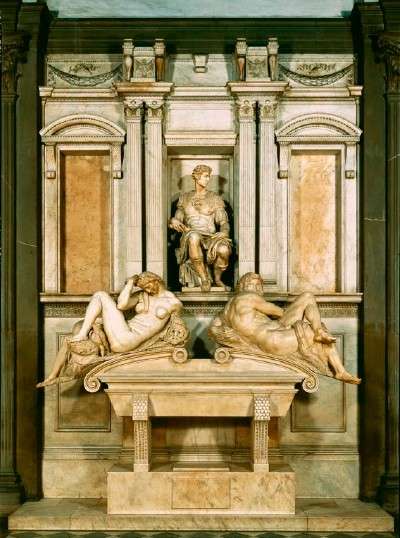 The tomb of Giuliano de' Medici by Michelangelo (20 feet 8 inches x 13 feet 9 inches) is made from marble and is located inside the Medici Chapel in San Lorenzo, Florence.

The tomb of Giuliano de' Medici was created from 1520 to 1534. Michelangelo transformed the two minor Medici dukes memorialized in this chapel into powerful allegorical figures, largely ignoring their actual appearance and giving them heroic qualities (Giuliano's statue is centered above the figures of Night and Day).

In the Michelangelo's own words, recorded by a contemporary, he did not portray the dukes "just as nature had drawn and composed them, but he gave them a greatness, a proportion, a dignity...which seemed to him would have brought them more praise."

Console detail of the tomb of Giuliano de' Medici by Michelangelo.

Ever mindful of the smallest detail, the consoles supporting the reclining Times of Day show Michelangelo's skillful use of fish-scale patterns and decorative moldings drawn from antiquity.

Go to the next page to read more about the tombs of the two Medici dukes, and to see pictures of the Tomb of Lorenzo de' Medici.