Marcus Aurelius Statue Base by Michelangelo 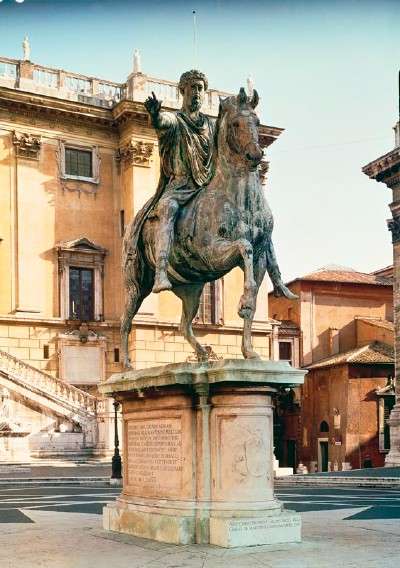 The equestrian statue of Marcus Aurelius at Piazza del Campidoglio, Rome. The marble base was made by Michelangelo.

At the center of the beautifully patterned Piazza del Campidoglio stands an equestrian statue of Roman Emperor Marcus Aurelius, the only bronze statue from antiquity known to have survived virtually intact. Michel­angelo designed the base of the statue. The original statue has been moved to the Capitoline Museum; the one in the piazza is an exact copy.

As with the Marcus Aurelius statue, the next page concerns a project that showcases Michelangelo's skill at working seamlessly with an already existing structure, the Farnese Palace Courtyard.