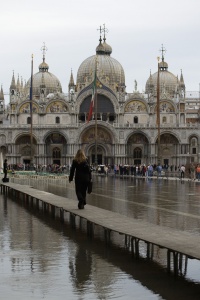 To cope with the flood conditions, elevated walkways have been constructed to help residents go about their business, as shown here in front of the Basilica of San Marco.
© Paul Seheult/Eye Ubiquitous/Corbis

Before the city became an iconic cultural landmark, its citizens countered rising water by simply filling in the lower levels of buildings, by or razing buildings entirely and then constructing new dwellings on top of older ones. In effect, it was a slow-motion concession to the unstoppable rising seas. But as Venice's architecture became more precious, no one wanted to destroy it.

Now, rising water slaps against permeable foundations, crumbling them. At high tide, transportation canals become impassable because the tunnels are too close to the waterline. Sidewalks, even elevated versions, turn into giant puddles. An entire infrastructure, and all of its inhabitants, are held hostage to the sea at high tide, particularly in winter.

Venice's wet wakeup call came decades ago. On Nov. 4, 1966, extreme flooding caused by a potent combination of high tides, lashing winds and sheets of rain lasted for around 22 hours, trapping people in buildings, causing widespread damage and leaving thousands homeless. It was then that Italians realized they must reckon with the sea, or wind up in it.

Italy made a national priority of protecting Venice and surrounding areas from flooding and extreme weather events. The years following the flood resulted in more floods -- floods of engineering and legislative paperwork.

But even after years of researching solutions, the Ministry of Infrastructure was unable to identify any single proposal to sufficiently address all of the engineering, economic and environmental concerns involved in a project of such enormous scale and complexity. The agency reviewed the possibility of raising important buildings and structures to protect them, as well as sealing off the lagoon by filling in the inlets to narrow or even permanently close them.

But it wasn't until decades later, in the early 1990s, that the government finally began settling on a type of mobile barrier system. Then began a long series of design reports, environmental impact studies and epic red tape wrangling that ultimately resulted in the MOSE dam project, which the government said in 2001 could be completed at a cost between $2 billion and $3 billion [source: Keahey].

The project stalled as people balked at the price tag and uncertainty as to whether MOSE would actually work as advertised. In 2003, the project finally launched, with an expected completion date of 2012 and a cost pushing $4 billion. As of mid-2014, some component testing had taken place, but the project was not finished.

So, how does the costly MOSE project plan to go mopping up the wet streets of Venice?