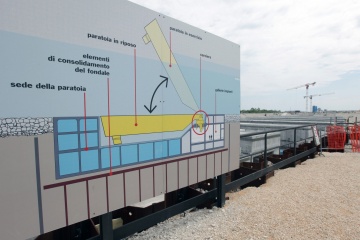 A MOSE construction site featuring a sign-size diagram of how the mobile gates will work.
© Barbara Zanon/Getty Images

What goes into the installation of one of these gates?

Construction teams start by securing the hinged barriers to the bottom of the sea. To install the barriers, they must make perfectly flat ditches in the seafloor. Then, those trenches are lined with concrete. Once the gates are constructed, they'll be sunk to the sea bottom, where they'll lie completely within the trench until they are activated during high water.

The concrete bed does more than provide a foundation for the gates. It also houses the mechanical components needed to inflate and deflate the barriers, and provides service tunnels for engineers, too.

Meanwhile, engineers must also strengthen the lagoon's natural barriers between the inlets. They're adding more breakwaters, jetties and seawalls. They're also adding protection to the sea bed and other underwater structures to make them stronger.

At its deepest, the seafloor of the inlets is about 100 feet (30.5 meters) below the waves, which means that some of the gates must be really, really tall. Each gate is also up to 16 feet (4.9 meters) thick. That's a whole lot of metal. So it's probably not surprisingly that the heaviest of these gates weighs in at close to 350 tons (317.5 metric tons). That's as much as a Boeing 747 airliner.

In spite of their enormity, it takes only around 30 minutes to pump the gates full of air and into place. Reversing the process is even faster. The gates can be flooded with water and resting on the seafloor again in only 15 minutes. On average, the closures will last between 4 and 5 hours, or until high tide has passed [source: NOVA]. During closures, ships will still be able to enter and exit the lagoon through a lock system.

Construction is underway at all three inlets, employing approximately 3,000 workers who contribute directly or indirectly to MOSE. As building continues, project managers are careful not to block more than half of an inlet opening so as to avoid interfering with commercial traffic and other port activities.

Once complete, MOSE will need around 150 caretakers to prevent malfunction and deterioration. That's no small challenge, considering that most of system will be submerged dozens of meters below the waterline.

Building and maintaining MOSE is an arduous task. But as you're about to read, just getting the project launched was a feat in and of itself.