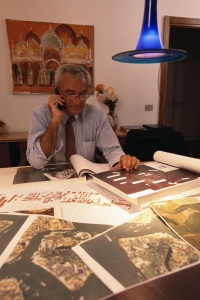 Any project as auspicious as MOSE is bound to draw its share of detractors. And when MOSE was proposed, critics took aim from all sides.

Everyday Italians were immediately put off by the fact that MOSE looked like a giant kickback scheme. The project was proposed by a group of 50 companies, Consorzio Venezia Nuova (CVN), which also happened be the same engineering and construction companies that wanted to build, and thus profit most heavily from, such a large and costly project.

In a country with plenty of other infrastructure needs, MOSE seemed to many like a plan born of corruption. Those suspicions weren't alleviated by the fact that some number crunchers found MOSE to be more expensive and complicated than necessary, especially considering there were similar, cheaper systems elsewhere in the world (for example, London and the Netherlands) that had already proved effective.

Environmental groups also take issue with MOSE. They say that impeding water movement will alter sediment flow, with all sorts of unknown consequences, including the possibility that sand buildup could prevent the gates from opening or closing properly.

There's also concern that hindering the natural inflow and outflow of water in the lagoon will cause irreversible damage to the ecosystem. In essence, these groups say that damming the lagoon even temporarily will increase pollution levels in the water, which would then harm plant and animal life. The assertion is that this is especially true of Venice because the city dumps much of its sewage directly into the lagoon, and the natural ebb and flow of tides helps flush the lagoon of these wastes.

MOSE proponents counter that Venice is long overdue for a modern water treatment system. They also say that by systematically closing just one or two of the barriers, the lagoon's flushing effect could actually be intensified.