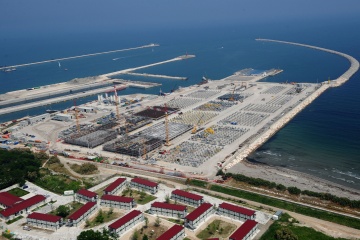 Construction at the mouth of the Lido inlet in 2010 as seen from the air.
© GIUSEPPE CACACE/AFP/Getty Images

MOSE opponents point out that a project of this size and expense may not provide a solid return on investment, in large part because no one really knows just how fast sea levels will rise. Should water levels advance faster than expected, MOSE could be obsolete in just a few decades.

There's also the fact that there are no guarantees that MOSE will work exactly as advertised. There may be weaknesses in the system that won't be exposed until an exceptional storm challenges the city's defenses.

Critics have attacked MOSE by appealing to courts to stop the project. So far, however, none of these efforts have done much to slow MOSE's progress. Now that the inertia of construction has taken hold, it's unlikely to stop due to bureaucratic or environmental disagreements.

As of mid-2014, MOSE moves onward. Its backers are confident that the system will work as promised. They also say that even if current scientific estimates are wrong and sea levels rise more quickly than Venetians hope, MOSE still buys Italy at least a century worth of time to find a better and more permanent solution [source: Poggioli].

Once the project is actualized, engineering and construction companies will wait to see how well their design and planning fares against Mother Nature's fury. And the still-dwindling number of native Venetians will wait, nervously, to see if MOSE, their city's lifeguard, can save them from falling prey to a relentless, uncaring sea.

It may seem odd that a bunch of long-ago Italians decided to build a small city in the middle of a lagoon. But 1,600 years ago, locals were on the run from invaders who threatened their lives. So Venetians built their city in the sea in the hopes that the massive amounts of water surrounding them would protect them and deter attackers. Their gamble paid off. The lagoon served as an extra-wide moat, effectively shielding its inhabitants from an invasion. Nowadays, it's the water that's the enemy, and until MOSE has faced and turned back a violent sea will Venetians know if their innovation protection scheme will save their cherished city.