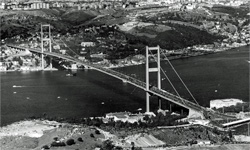 The Bosphorus Bridge at the Nov. 5, 1973, opening ceremony by President Koroturk on the 50th anniversary of the founding of the Turkish Republic.
Keystone/Getty Images

The Strait of Bosporus, also known as the Istanbul Strait, connects the Black Sea to the Sea of Marmara. It also separates Asia from Europe. As such, it holds great strategic value during times of war and peace. Although attempts to bridge the narrow body of water date back to the Persian Empire, the most impressive structure didn't open for business until 1973. That's when engineers completed the Bosporus Bridge, a 4,954-foot- (1.51-kilometer-) long suspension bridge that remained the only bridge in the world linking two continents until the Fatih Sultan Mehmed Bridge suspended its roadway above the strait nearly 15 years later.

Even with a companion bridge stealing some of its glory, the Bosporus Bridge remains a grand sight, especially at night. Thanks to an LED lighting system, the bridge's towers and zigzagged cables glow brilliantly in different colors.

Day or night, the Bosporus Bridge shuttles traffic between continents on an eight-lane deck. Each direction has three lanes for vehicles, plus one emergency lane and one sidewalk. Pedestrians were allowed to access the bridge until 1977, when authorities stopped the practice for safety reasons. They temporarily suspended the rule in May 2005 when Venus Williams and Ïpek Senoglu played a tennis match on the bridge to promote the inaugural Istanbul Cup in Turkey. Fans gathered on two of the bridge's lanes to watch the players trade volleys from Asia to Europe and back again.

The next bridge on our list has never hosted a tennis match, but it has become one of ngland's hottest tourist attractions.