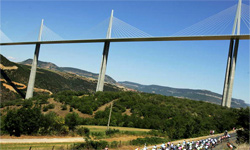 The Eiffel Tower, which looms over the Paris skyline, measures 1,063 feet (324 meters) high from its four-footed base to the tip of its flagpole. Now imagine tearing the tower from its moorings and carrying it southeastward, through the Massif Central region of France to the Cévennes Mountains. Now imagine setting the tower down in the Tarn Valley, a deep gorge surrounded by high, rolling hills near the town of Millau, France. Now, finally, picture lining up six more similar towers and stringing a roadway across the valley. Et voila -- the Millau Viaduct, a massive bridge that opened in 2004 to carry the A75 motorway south to Beziers.

In reality, the highest point of this cable-stayed bridge is taller than the Eiffel Tower by 62 feet (19 meters) and only a little bit shorter than the Empire State Building (1,250 feet or 381 meters tall, if you're wondering). A car traveling over the span is actually suspended 890 feet (271 meters) above the valley. Drivers who overcome their fear of heights can shave 62 miles (100 kilometers) and four hours off the long trip from Clermont-Ferrand to popular destinations along the Mediterranean Sea. The bridge also reduces pollution by relieving congestion that used to occur as cars queued up to cross a much older and smaller bridge in Millau.

Another amazing cable-stayed bridge is the Octavio Frias de Oliveira Bridge in Brazil. That's the next stop on our tour.