by Ed Grabianowski
Prev NEXT
3 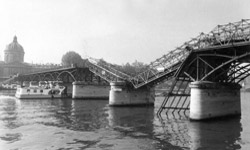 There are bridges whose collapse was inevitable before the bridge was ever built. The fault lies not with the construction of the bridge, but the design itself. The bridge is doomed to failure from the moment it was laid out on a blueprint.

One of the worst accidents in U.S. history is the collapse of the walkways in the Kansas City Hyatt Regency hotel. The walkways connected various parts of the second, third and fourth floors, overlooking the hotel lobby below -- they were essentially pedestrian bridges inside the hotel. On July 17, 1981, the fourth-floor walkway collapsed, crashing onto the second-floor walkway which was directly below it. Both walkways then fell onto the lobby. Both the lobby and walkways were crowded with people watching or participating in an evening dance contest. The collapse killed 114 people [source: Associated Press].

Why did it happen? A redesign of the original plan caused the walkways to be constructed in such a way that structural elements ended up supporting the weight of both the second and fourth floor walkways simultaneously, doubling the load on them. Investigation revealed that even the original design was far too weak to support significant loads -- and the redesign made the problem much worse [source: Martin]. It was nearly inevitable that they would collapse at the worst possible moment.

The 2007 collapse of the I-35 Bridge over the Mississippi River in Minneapolis, Minn. was also due to a design flaw. Steel gusset plates which bound key parts of the bridge structure together weren't large enough. Additional weight placed on the bridge by concrete resurfacing and construction equipment caused the plates to buckle, and the entire bridge collapsed, killing 13 [source: NTSB].