by Gallagher Flinn
Prev NEXT
9 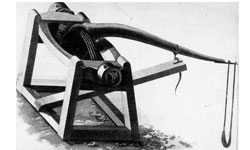 The ancient Romans built the first versions of this siege weapon, the onager.
Hulton Archive/Getty Images

Like a lot of technology, Roman siege weaponry was mostly developed by the Greeks and then perfected by the Romans. Ballistae, essentially giant crossbows that could fire large stones during sieges, were mostly back-engineered designs from captured Greek weapons. Using loops of twisted animal sinews for power, ballistae worked almost like springs in giant mousetraps -- when the sinews were tightly wound and then allowed to snap back, they could launch projectiles up to 500 hundred yards (457 meters). Since it was light and accurate, this weapon could also be fitted with javelins or large arrows and used to pick off members of opposing armies (as an anti-personnel weapon). Ballistae were also used to target small buildings during sieges.

Romans also invented their own siege engines called onagers (named after the wild donkey and its powerful kick) to fling larger rocks. Though they also used springy animal sinews, onagers were much more powerful mini-catapults that fired a sling or a bucket filled with either round stones or combustible clay balls. Though they were much less accurate than ballistae, they were also more powerful, making them perfect for blasting down walls and setting fires during sieges.