by Gallagher Flinn
Prev NEXT
7 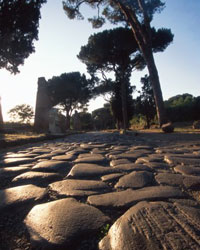 They don't build them like they used to. Ancient Roman roads like the Appian Way were made to last.
Marco Cristofori/Iconica/Getty Images

It's impossible to mention Roman engineering without talking about roads, which were so well-constructed that many of them are still in use today. Comparing our own asphalt highways to an ancient Roman road is like comparing a cheap watch to a Swiss version. They were strong, precise and built to last.

The best Roman roads were built in several stages. First, workers dug about 3 feet (0.9 meters) down into the terrain where the planned road would be. Next, wide and heavy stone blocks were set in the bottom of the trench and then covered with a layer of dirt or gravel that would allow drainage. Finally, the top layer was paved with flagstones, with a bulge in the center for water to run off. In general, Roman roads were about 3 feet (0.9 meters) thick and enormously resistant to the ravages of time.

In typical Roman fashion, engineers of the Empire insisted on using straight lines for their roads primarily and tended to push through obstacles rather than building around them. If there was a forest, they cut it. If there was a hill, they tunneled through it. If there was a swamp, they drained it. The drawback, of course, to that type of road building is the enormous amount of manpower required, but manpower (in the form of thousands of slaves) was something that the ancient Romans always had in spades. By A.D. 200, there were more than 53,000 miles (85,295 kilometers) of major highways crisscrossing the Roman Empire [source: Kleiner].