by Terri Briseno
Prev NEXT
6 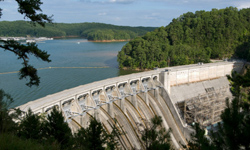 Among other projects, Clarke weighed in on dam design.
iStockphoto/Thinkstock

Not many women in history have helped design dams, but Edith Clarke (1883-1959) was at the forefront in bringing sophisticated electrical engineering concepts to dam building in the western U.S.

Clarke was the first woman to earn a master's degree in electrical engineering from the Massachusetts Institute of Technology (MIT) and became the first female chosen as a fellow by the American Institute of Electrical Engineers (AIEE). Her initial round with higher education came after she was orphaned and used inheritance money to attend Vassar College.

After graduating from Vassar and before attending MIT, Clarke worked in computing at AT&T, but much of her career -- about 26 years -- was spent at General Electric Co. (GE). She had the distinction of becoming a salaried engineer in 1922, two years after being hired at GE, which was quite uncommon for a woman at that time. Clarke also won awards for her scholarly papers and a patent for a specialized calculator. After retiring from GE, she accomplished yet another first by becoming the first female teacher in the engineering department at the University of Texas, Austin.

Not a bad resume for an orphan girl from a small town in Maryland [source: IEEE].