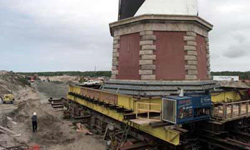 The Cape Hatteras lighthouse on the Outer Banks of North Carolina may not be a traditional structure the way some of the others on this list are, but how could we leave out what came to be known as the "Move of the Millennium?"

The North Carolina coastline had eroded 1,380 feet (421 meters) since the Cape Hatteras lighthouse was built, leaving some people to fear that the tallest lighthouse in the nation would be lost to the encroaching Atlantic Ocean. The lighthouse, which was 129 years old at the time of its move in 1999, posed a special challenge because it had no internal structural supports to hold it together during the move. Though the National Park Service approved a $12 million budget to move the structure, many citizens didn't think the job could be done. The project even faced a last-minute injunction to stop the move.

Apprehensive crowds showed up to watch as the lighthouse, mounted on a foundation of 400 tons of steel -- made up by hydraulic jacks and steel beams -- edged its way down a metal runway. The hydraulic rams took 45 seconds to a minute to push the lighthouse just 5 feet (1.5 meters), and the entire 2,900-foot (884-meter) move took 23 days. The team behind moving Cape Hatteras was rewarded with the Opal Award from the American Society of Civil Engineers, which is the industry equivalent of an Oscar [source: National Park Service].