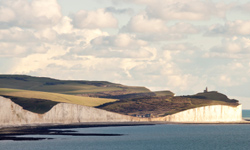 At the far right, you can just see the Belle Tout jutting up from the perilously sharp cliffs in East Sussex.
©iStockphoto.com/scottyh

The Belle Tout lighthouse isn't one of the world's largest structures, but moving an 850-ton building listing on the precipice of a 300-foot cliff is no small feat -- and still deserves a spot on our list.

The Belle Tout lighthouse was built in 1829 atop the Beachy Head cliff in East Sussex, England. At the time, the beacon-equipped building was a safe distance from the edge, but years of wind and seawater took their toll on the cliff. By the time Belle Tout was relocated in 1999, it was only a few precarious feet from land's end.

After a successful fundraising effort, during which tickets were sold to view the big move, the building was painstakingly excavated, outfitted with supports and raised with hydraulic jacks before being slid onto computer-controlled tracks. It took days to move the lighthouse 164 feet (50 meters) to a position farther from the cliff's edge. At one point, the move slowed to a rate of a mere two feet over a span of three hours. Eventually, it did reach its new foundation -- a stone base that was carried to the site one wheelbarrow at a time so as not to compromise the cliff -- and gave its owners a new (and safe) view [source: Wright].

The next building on our list may be a relative lightweight, but it earned its place due to the distance it traveled.