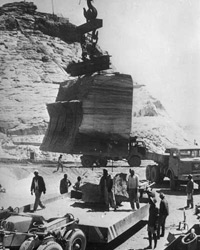 The Abu Simbel move was undertaken from 1964 to 1966 and funded by donations from 52 countries.
Keystone/Getty Images

It's not unusual for experts and laypersons alike to marvel at how stone pyramids and temples were built in ancient Egypt. But have you ever considered what it would take to relocate one to an entirely new position? That's exactly the issue the Egyptian government faced in the early 1960s when a dam was built on the River Nile, causing the water level in Lake Nasser to rise -- and eventually overtake -- the site on which the Abu Simbel temple stood.

The construction of the Abu Simbel temple was ordered between 1270 and 1213 B.C. during the reign of Ramses II. As one might expect of an ancient Egyptian ruler, a series of larger-than-life images of the pharaoh were carved into the stone temple. While the stonework made for a royalty-pleasing aesthetic at the time, and created a popular tourist attraction in the centuries to come, preserving the intricate carving made the building's relocation a challenge. In order to migrate the temple to its new home, hundreds of workers cut and numbered 1,036 blocks -- weighing an average of 30 tons each -- and transported them to a higher elevation nearly 700 feet (213 meters) away. The numbered blocks were then used to reassemble the temple, creating one of the largest building moves ever [source: Krause].

But even the Abu Simbel can't beat the structural moving record made by a building in China – even though Abu Simbel is more than twice as heavy.