Damage to the Dam 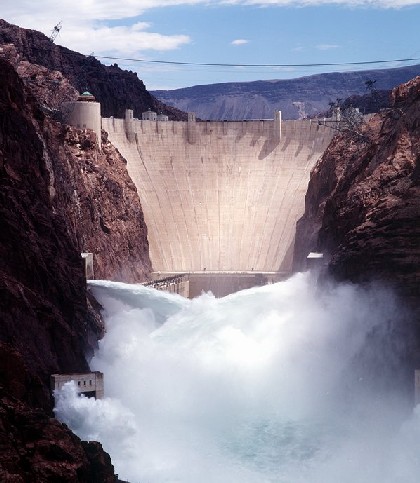 As the water released by the Hoover Dam moved through these two lakes, it would likely destroy them and their dams as well. That's where the real impact would be felt, because these lakes affect a huge number of people. The water in them produces hydroelectric power, irrigates farmland and supplies drinking water to cities like Los Angeles, Las Vegas, Phoenix and San Diego.

The Hoover dam produces roughly 2,000 megawatts of power. Davis and Parker dams produce less, but together they might all produce 3,000 megawatts. That represents about one half of one percent of the total electrical power produced in the United States. If you eliminated a sizable amount of generating capacity like that, especially in that area of the country (near Los Angeles and Las Vegas, for example), it would definitely cause problems.

The destruction of irrigation water supplies would also have a huge effect on farming in the region. Farmers in the Imperial Valley get most of their water from the Colorado River, and these irrigation systems would collapse. Prior to irrigation, the Imperial Valley was a barren desert. Today it is the home of more than half a million acres of farmland and produces more than a billion dollars in fruits and vegetables every year.

There would be large effects as well from the loss of drinking water. For example, Las Vegas gets 85 percent of its drinking water from Lake Mead -- the lake behind Hoover dam. With the loss of water and the loss of power, Las Vegas would become uninhabitable, and that would displace 1.5 million residents and empty more than 120,000 hotels rooms and the casinos, bringing the multi-billion-dollar gambling industry in this city to a halt.

Isn't it amazing how much commerce, and how many people, depend on that one dam?