When the Levee Breaks 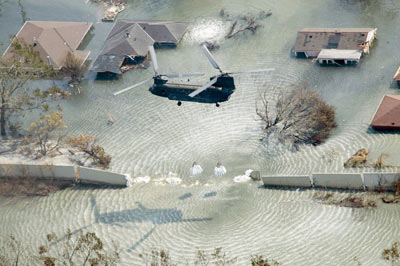 While strolling along the beach or enjoying a picnic by a riverbank, it's easy to forget how powerful Earth's waterways really are -- until floods and storms jar us to remember. In 1927, the Mississippi River swelled under heavy rains, charging through a line of levees and flooding an area the size of Ireland. In 1953, the North Sea broke through the Netherland's ancient system of dikes and killed thousands.

In 2005, New Orleans made international news when Hurricane Katrina breached its levees. Much of the city lies 10 feet (3 meters) below sea level. Over the course of the city's history, low-lying, boggy areas have been pumped dry to create new land. Much of this reclaimed land has sunk as it dried out. The entire city now depends on the levees, along with massive pumping stations, to keep the water out.

Hurricane Katrina flooded 80 percent of the city, killing approximately 1,600 people and displacing some 200,000 others [source: Dolfman et al., Gonzales]. How could this happen? An investigation by the National Science Foundation pointed to five major reasons:

As New Orleans continues to rebuild from the disaster, some of these concerns are finally being addressed. The Netherlands faced a similar situation following the country's 1953 flood. How do its successes match up to New Orleans' failures? Read the next page to find out.