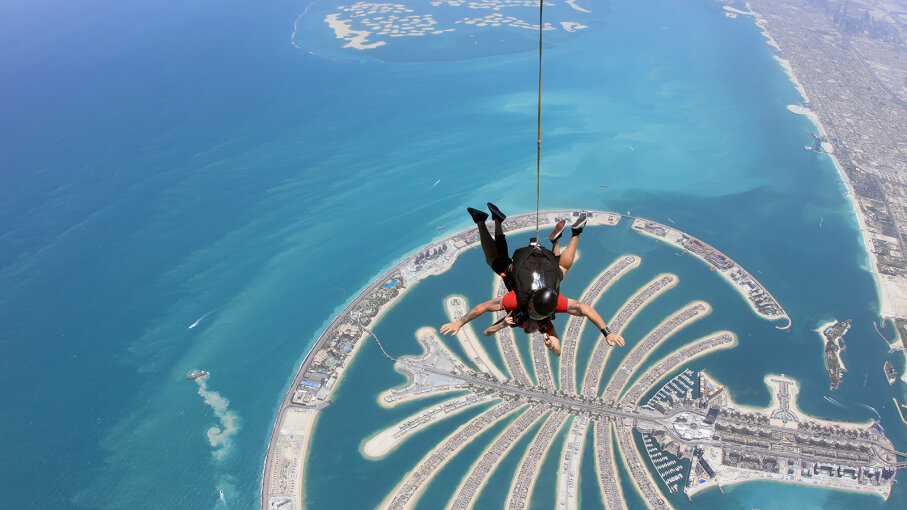 The British Isles are made up of more than 6,000 islands, but that wasn't enough for some of their Neolithic residents. In northern Scotland, ancient peoples used to pile hundreds of boulders on lake bottoms, riverbeds and estuary floors. Using this technique, they painstakingly built scores of tiny islands, some of which are around 5,500 years old.

"Island construction has occurred for thousands of years," John W. McManus, a professor and marine ecologist at the University of Miami, says in an email.

Over in the New World, the Aztecs engineered "chinampas," minuscule islands for their crops. And one of the most breathtaking attractions in Micronesia is Nan Madol, a cluster of almost 100 man-made islets that served as the Saudeler Dynasty's capital.

You can also find artificial landmasses in some of the biggest metro areas on Earth. "There are several large man-made islands around New York City," notes McManus, who adds that the U.S. had others built "along the Miami waterfront and on atolls of the South Pacific." Likewise, Japan's Kansai International Airport occupies an island in Osaka Bay that was created during the late 20th century at a cost of about $17 billion.

Of Airports and Agriculture

At barely over a 1 mile (1.7 kilometers) long, the Kansai International Airport's custom-built island was a massive undertaking. The entire outcrop is basically a huge pile of dirt and muck that was dumped off the coast of Honshu. Sediments for this project were harvested from Japanese mountains, the floor of Osaka Bay, and locales in both Korea and China. Altogether, it took more than 226 million square feet (21 million square meters ) of relocated soil — plus 10 million work hours — to assemble the island.

In their own way, Aztec chinampas were no less impressive. Clustered together in wetland areas, individual chinampas were bordered by mud-based walls reinforced with aquatic plants. Between these ran a grid-like canal system. Before construction began, it was sometimes necessary to drain — and then refill — an entire swamp or lake using narrow ditches.

The effort was worthwhile. On a well-irrigated chinampa network, fruits, flowers and vegetables (like corn) could be grown all year-round. And by raising individual islands high above the water level, farmers could keep the roots of their precious crops from getting oversaturated.

Chinampas are still used today. Every weekend, tourists flock to the "floating gardens" of Xochimilco, a borough of Mexico City. Here, leisurely boat rides are offered on a historic canal system loaded with modern chinampas. Upon those rectangular isles, farmers cultivate lettuce heads, radishes and other kinds of produce.

The historic chinampa canals in Xochimilco, Mexico City, Mexico open up on the weekend to tourists who enjoy leisurely boat rides on colorful "trajineras."
Wikimedia

How the Big Apple got its anthropogenic islands is a very different story. One of them was by accident. Back in the 1890s, a pile of discarded rubble slowly congregated in the middle of the East River while a tunnel was being constructed beneath that waterway. Eventually, the stack of rocks got tall enough to break the river's surface and become Belmont Island. Also called U Thant Island (albeit, unofficially), it measures a scant 100 feet wide by 200 feet long (30.48 meters by 61 meters).

Down in Lower New York Bay, you may notice two larger outcrops: Hoffman and Swinburne islands. Erected in the 1860s, they were conceived as quarantine zones for immigrants of poor or questionable health. But nowadays, Hoffman and Swinburne are bird sanctuaries maintained by the National Parks Service.

Those twin islands were built with sediments dredged up from New York Harbor. The basic strategy is alive and well.

Off the coast of Dubai, Nakheel Properties has been developing artificial archipelagos designed to look like giant halo-ringed palm trees when seen from above. The first, known as the Palm Jumeriah, is open for business, boasting waterparks, spas and luxury hotels — to say nothing of its 10,000-plus residents.

To transport and arrange all that building material, Dubai relied on dredger ships. Equipped with powerful hoses, the vessels sucked huge quantities of sand out of the Persian Gulf. Much of the bounty was later sprayed onto pre-designated areas through nozzles in the ships' bows. (It's a process called "rainbowing.")

Loose sand beds and new buildings are a terrible combination — so the emergent islands had to be firmed up with vibro compaction. More than 2,000 holes were drilled into the turf and temporarily plugged with long metal spears. By vibrating these, engineers shuffled up the sand grains, narrowing the gaps between them until the new ground became denser.

Some artificial islands were conceived specifically with animal welfare in mind. Such was the case in the Markermeer, a 270-square-mile (700-square-kilometer) lake that was created in 1932 by walling off part of a saltwater bay on the coastal Netherlands. In the process, natural water currents were interrupted, resulting in a cloudy, silt-filled environment.

To clear up the water and attract wildlife, that pesky silt is being used to create a series of islets. The first of these was completed in 2016. Since then, the mini-islands have become popular rest stops for local swallows.

But man-made islands aren't always a boon for the ecosystem. "Both the dredging for materials and the [building process] can have severe ecological consequences," McManus says. "Silts and sands from coral reefs are particularly damaging to nearby marine life."

That's why biologists are getting worried about the South China Sea. From 2014 onward, China has been dredging up marine sediments and dumping them on live coral reefs in this area. The resultant islands are — to say the least — a bone of political contention.

According to McManus, most of the silts and sands naturally found by reefs "comes from the wearing down" of dead organisms like "corals, shelled animals, many species of seaweed, certain microorganisms and others." Individual grains often become pointed shards of leftover shells and skeletal material.

So when this stuff gets dredged, the sand particles "can kill almost any nearby life." When disturbed, the fine-grained sand creates lingering "clouds" in the water that block out sunlight. Furthermore, McManus warns that reef sands and silts "easily stick to breathing surfaces such as the gills of fish and many invertebrates," resulting in mass die-offs.

"In the case of the massive island-building by China in the South China Sea within the last decade ... roughly 15 million square meters [161 million square feet] of sensitive marine ecosystem was permanently destroyed," McManus says. Coral reefs break up waves during violent storms, protecting life and property in coastal areas. They also accommodate thousands of seagoing organisms, including many of the fish species that help sustain maritime economies.

On an overpopulated planet, the desire to build new lands is understandable. But experts warn that if we don't proceed with caution, coral reefs and other natural resources that we all depend on will find themselves at risk.

NOW THAT'S INTERESTING
During the 2004 Republican National Convention in New York City, filmmaker Duke Riley rowed out with a friend to Belmont Island and declared it a sovereign nation. On their way back, the duo was apprehended by the Coast Guard.