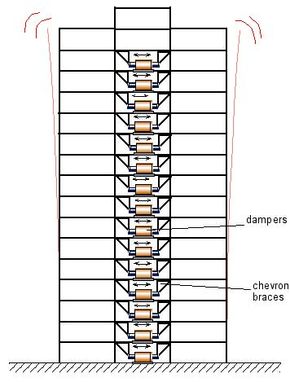 In the future, buildings might be built with hundreds of large dampers filled with MR fluid to stabilize the structures during earthquakes. This diagram shows how the dampers would work during an earthquake.
Photo courtesy Lord Corp.

Unlike many of nature's deadly forces, earthquakes almost always strike without warning. These destructive and devastating forces can topple cities in seconds, leaving behind rubble a­nd tragedy in their wakes. Earthquakes are not limited to any one area of the world or any one season of the year. Although most earthquakes are just small tremors, it only takes one to cause millions of dollars in property damage and thousands of deaths. For this reason, scientists continue to pursue new technologies to limit the destruction that earthquakes can dish out.

At Lord Corporation's labs in Cary, N.C., researchers believe they have developed, in cooperation with University of Notre Dame researchers, the latest product that can reduce the damage caused by earthquakes. Lord is one of the largest producers of a unique substance, called magnetorheological fluid (MR fluid), which is being used inside large dampers to stabilized buildings during earthquakes. MR fluid is a liquid that changes to a near-solid when exposed to a magnetic force, then back to liquid once the magnetic force is removed.

During an earthquake, MR fluid inside the dampers will change from solid to liquid and back as tre­mors activate a magnetic force inside the damper. Using these dampers in buildings and on bridges will create smart structures that automatically react to seismic activity. This will limit the amount of damage caused by earthquakes. In this edition of How Stuff WILL Work, you will learn more about MR fluid and its ability to change states. We will also look at how buildings, new and old, can be turned into smart structures.

What is MR Fluid 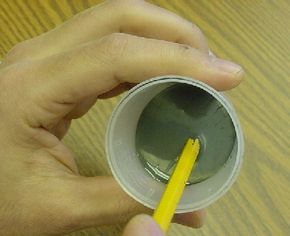 Above, MR fluid prior to magnetization. Below, the fluid turned into a solid after it was magnetized. Notice the shiny surface of the liquid in the top photo and the dull surface in the bottom photo.

Looking at it in a beaker, MR fluid doesn't seem like such a revolutionary substance. It's a gray, oily liquid that's about three times denser than water. It's not too exciting at first glance, but MR fluid is actually quite amazing to watch in action.

A simple demonstration by David Carlson, a physicist at the North Carolina lab, shows the liquid's ability to transform to solid in milliseconds. He pours the liquid into the cup and stirs it around with a pencil to show it's liquid. He then places a magnet to the bottom of the cup, and the liquid instantly turns to a near-solid. To further demonstrate that it's turned to a solid, he holds the cup upside down, and none of the MR fluid drops out.

So, what is it that gives MR fluid its unique ability to transform from liquid to solid and from solid to liquid quicker than you can blink an eye? The carbonyl iron particles. When a magnet is applied to the liquid, these tiny particles line up to make the fluid stiffen into a solid. This is caused by the dc magnetic field, making the particles lock into a uniform polarity. How hard the substance becomes depends on the strength of the magnetic field. Take away the magnet, and the particles unlock immediately.

While scientists have just recently discovered many new applications for MR fluid, it has actually been around for more than 50 years. Jacob Rabinow is credited with discovering MR fluid in the 1940s while working at the U.S. National Bureau of Standards (now the National Institute of Standards and Technology).

Until about 1990, there were few applications for MR fluid because there was no way to properly control it. Today, there are digital signal processors and fast, cheap computers that can control the magnetic field applied to the fluid. Applications for this technology include Nautilus exercise equipment, clothes washing machine dampers, shock absorbers for cars and advanced leg prosthetics.

In the next section, we will look at the seismic applications of this MR technology, which may have the biggest impact on saving lives and preventing the collapse of buildings. 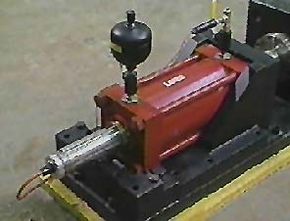 Skyscrapers and long bridges are susceptible to resonance created by high winds and seismic activity. In order to mitigate the resonance effect, it is important to build large dampers into their design to interrupt the resonant waves. If these devices are not in place, buildings and bridges can be shaken to the ground, as is witnessed anytime an earthquake happens.

Dampers are used in machines that you likely use every day, including car suspension systems and clothes washing machines. If you take a look the How Stuff Works article on washing machines, you'll learn that damping systems use friction to absorb some of the force from vibrations. A damping system in a building is much larger and is also designed to absorb the violent shocks of an earthquake. The size of the dampers depend on the size of the building. There are three classifications for dampening systems:

A full-scale MR fluid damper that is 1-meter long and weighs 250 kilograms. This one damper can exert 20 tons (200,000 N) of force on a building.
Photo courtesy Lord Corp.

Inside the MR fluid damper, an electromagnetic coil is wrapped around three sections of the piston. Approximately 5 liters of MR fluid is used to fill the damper's main chamber. During an earthquake, sensors attached to the building will signal the computer to supply the dampers with an electrical charge. This electrical charge then magnetizes the coil, turning the MR fluid from a liquid to a near-solid. Now, the electromagnet will likely pulse as the vibrations ripple through the building. This vibration will cause the MR fluid to change from liquid to solid thousands of times per second, and may cause the temperature of the fluid to rise. A thermal expansion accumulator is fixed to the top of the damper housing to allow for the expansion of the fluid as it heats up. This accumulator prevents a dangerous rise in pressure as the fluid expands.

Buildings equipped with MR fluid dampers will mitigate vibrations during an earthquake.

Depending on the size of the building, there could be an array of possibly hundreds of dampers. Each damper would sit on the floor and be attached to the chevron braces that are welded into a steel cross beam. As the building begins to shake, the dampers would move back and forth to compensate for the vibration of the shock. When it's magnetized, the MR fluid increases the amount of force that the dampers can exert.