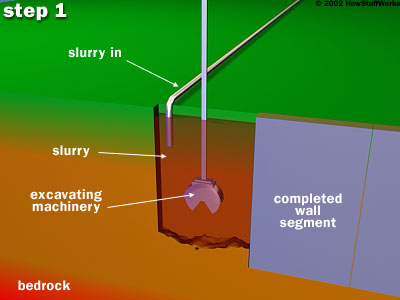 Before the Port Authority could build up, to erect the massive towers, they had to build down to establish the buildings' foundations. Massive skyscrapers need to rest on bedrock, the solid rock underneath the ground's soil, or they won't be able to stand up. To get to this level, the crew has to dig up a huge mass of dirt as the first stage in construction.

At the WTC site, the bedrock is between 55 feet and 80 feet (17-24 m) down. Digging to this level is no simple task, obviously, but it's par for the course in skyscraper construction. The WTC crew faced an additional, atypical challenge, however. The build site was immediately adjacent to the Hudson River, and only a few feet down, the soil was completely saturated -- if the crew started digging, the excavation site would be flooded.

Draining the Hudson River would have been a logistical nightmare. Among other things, it would have compromised the stability of other buildings along the shore. Instead, the Port Authority decided to use the unconventional "slurry trench method," previously employed mainly in subway construction.

The process was pretty simple, at least conceptually. The crew used excavating machinery to dig 3-foot-wide trenches down to bedrock level. As they dug, they piped in a slurry made of water and an expansive clay called bentonite. The bentonite slurry material would expand along the sides of the trench, blocking the groundwater.

Once they finished a 22-foot (6.7-m) section of trench, the crew lowered a narrow, seven-story steel framework into the hole. Then they poured in concrete from the bottom of the trench while pumping the slurry out through the top.

In this way, they built solid, steel-reinforced concrete walls underground. They repeated the process with 152 framework segments, each measuring 22 feet across, to form a large box measuring four city blocks by two city blocks (about 500x1,000 feet / 152x304 m). This box, commonly referred to as a "bathtub," formed a water-tight perimeter wall for the two towers' foundation structure.

With the bathtub in place, the construction crew could start digging down to the bedrock to lay the buildings' foundation support. The only problem was that the soil inside the bathtub was the primary support means holding the walls in place -- remove the dirt inside, and the weight of the dirt and water outside would push the walls inward. To keep the walls in place while they built up the foundation, the crew had to run underground tiebacks, cables extending from the perimeter walls to rock surrounding the bathtub. This provided temporary support until the crew could finish a support structure inside the bathtub.