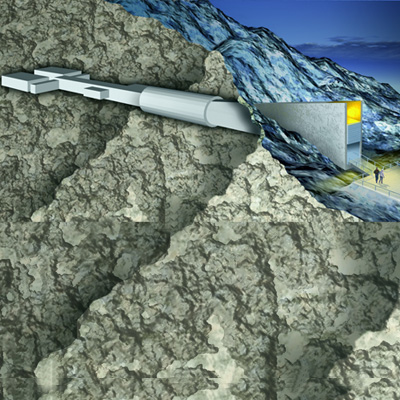 While some of us are stocking up on duct tape, gas masks and enough bottled water to last through the initial weeks of the end of the world, the government of Norway has partnered up with the Global Crop Diversity Trust to prepare for the event that doomsday leaves some survivors. The Svalbard International Seed Vault, dubbed the "doomsday vault," will house samples of every variety of crop seed available in every country in the world. The vault's purpose is safeguard agricultural biodiversity in the event that nuclear war, climate change, a meteor hit or another Earth-shattering event destroys all current plant life in the world or in a particular region.

The Global Crop Diversity Trust has named several other uses for the vault, including replacing seeds lost in damage to any of the 1,400 seed vaults around the world, safeguarding seeds for developing countries and spreading general knowledge of the threat to crop diversity (the United Nations puts the percentage of genetic diversity already lost to ecological damage at 75 percent). But other uses aside, the design of the vault screams "the end is near." This is definitely a structure built with doomsday in mind. Its main purpose is to provide diverse crop life in the event that life as we know it disappears.

Norway revealed the design of the vault in February 2007. It will be located on the remote, frigid island cluster of Svalbard, well north of Norway's mainland, 621 miles (1,000 km) into the Arctic Ocean. The entrance to the vault is on a mountain called Spitsbergen, chosen for a number of factors including its perpetually frozen temperatures. If the mechanical refrigeration system were to malfunction, the seeds would remain frozen due to the year-round permafrost in the mountain, maintaining an inner temperature of about -5C (23F). The entrance and the inner seed vaults stand at 430 feet (130 meters) above sea level. At this height, the vault will be protected from the sea-level effects of climate change, including the absolute worst case scenario that most scientists believe won't happen: If the entire ice structure of the continent of Antarctica were to melt, the sea would rise about 200 feet (61 meters). The seed vault wouldn't be touched by the rising water.

Beyond the entrance, a concrete-lined tunnel leads 390 feet (120 meters) into the frozen mountain, leading to two vaults. Because they're situated so deep into the mountain, even a significant rise in air temperature should leave the vault temperatures unaffected should the electric refrigeration system shut down. The total storage capacity of both vaults combined is 3 million seeds. Ideally, the vault will house every type of seed available in today's world, and Norway will add to the collection as more seed types become available. The key, supporters say, to long-term survival after a catastrophic event is genetic diversity. In this case, it's genetic diversity in food crops. Who knows which seeds will be able to adapt to life after nuclear holocaust or major ecological destruction from global warming?

Incidentally, the vault's designers doubt it would survive a direct hit by a nuclear bomb. But most other major disasters, including a nuclear strike nearby, shouldn't harm it a bit.

Inside the seed vaults, the temperature is kept at -18C (0F), which will keep the seeds frozen -- alive but unable to germinate. At that temperature, scientists estimate that seeds can last anywhere from 20 to hundreds of years without dying, depending on the crop type.

To protect the global treasure, the tunnel features several reinforced doors before you get to the vaults, and the entrance will be under 24-hour video surveillance. The architects have purposely designed the structure to require no human maintenance at all, for obvious and chilling reasons. The entrance will not be hidden. On the contrary, it will be easy to spot and artistic, equipped with special panels that will reflect light from both sun and the moon quite dramatically. The idea is that the vault should call attention to itself, just in case everyone who currently knows about the vault is unable to share their knowledge of what lies deep inside one of the mountains of the Svalbard islands.

Construction on the roughly $5 million structure begins in March 2007 and should be finished by September of the same year. Once the structure is complete, it will start accepting seeds from around the world, although its official opening is not slated until winter 2008.

For more information on the Svalbard International Seed Vault and related topics, check out the following links:

Americans Use 500 Million Straws Every Day. Would You Pledge to Go Strawless?
Mother Nature Says Stop Releasing Balloons
How the Eden Project Works