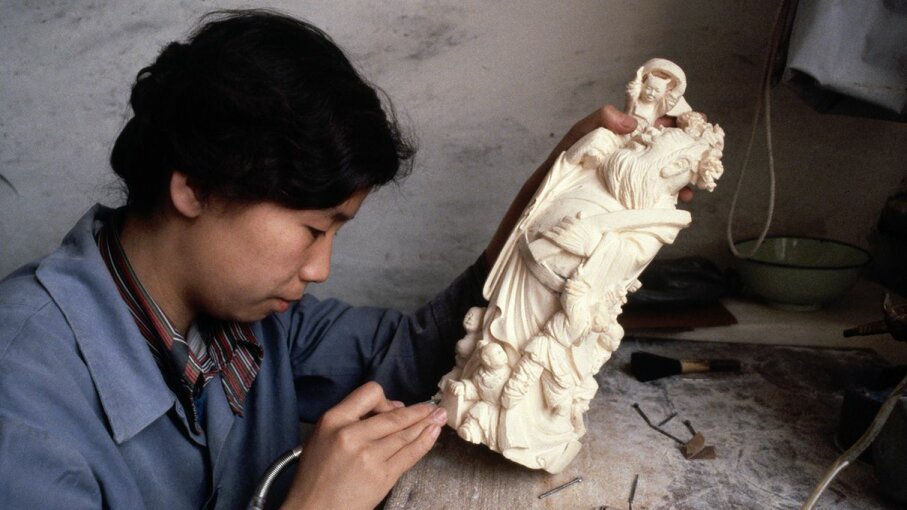 In the year 1800, an estimated 26 million elephants existed on this planet. Today, we've got fewer than 1 million. Something happened, and that thing was what happens to most of the great stuff on this planet: humans.

Elephants have these long, continuously-growing teeth called tusks that people have been going nuts for since... well, nobody actually knows for how long. According to John Frederick Walker's book "Ivory's Ghosts," ancient ivory objects have been found from as far back as the sixth millennium B.C.E.. Before plastic, ivory made from elephant tusks was basically plastic. Smooth, durable, and easily carved, ivory has been used throughout history to make ornaments like jewelry and statues, but also everyday objects like buttons, dominoes, pistol grips, piano keys, combs and billiard balls.

International trade in ivory was prohibited in 1989, and 2016 saw a near-complete ban on buying or selling ivory within the United States. But still, 30,000 elephants are still illegally poached in Africa each year, and an estimated 50 to 70 percent of that ivory goes to China, where there's a long tradition of ivory carving (those 8,000-year-old ivory objects were found in China), and the growth of the Chinese middle class has made it possible for more Chinese can afford luxury items like ivory jewelry and carvings. And since the tusks of just one adult elephant can be worth 10 times a person's average annual income in some African countries, it's tough to keep the ivory black market down when everybody's winning — except the elephants.

But now China has decided to shut down its commercial ivory trade and prohibit the sale of ivory by the end of 2017. This could partly be because China's swinging ivory market and the country's willingness to keep ivory carving outfits in business — despite the fact that almost all the ivory that finds its way into the country does so illegally — poses an image problem for a country that already has the reputation for shirking their environmental duties.

2008's Convention on International Trade in Endangered Species of Wild Fauna and Flora (CITES), which regulates all international trade in wildlife, agreed to make an exception for China, allowing the country to occasionally buy stockpiled ivory legally from a handful of southern African countries. The intention here was to reduce illegal elephant poaching, but instead it led to a 30 percent decline in elephant populations between 2007 and 2014. Not exactly the outcome CITES was hoping for.

It remains to be seen whether closing China's ivory markets will help African elephant populations and cut down on poaching, but many wildlife advocates have hope that it will make a difference:

"I am very proud of my country for showing this leadership that will help ensure that elephants have a fighting chance to beat extinction," Aili Kang, Asia executive director at the Wildlife Conservation Society, told the L.A. Times. "This is a game changer for Africa's elephants."

Now That's Unsettling
In Africa, one elephant is killed every 26 minutes for its ivory.