What is civilization's impact on Earth's environment? 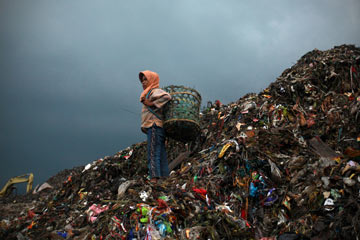 Scavenging for plastic, a child stands atop a mountain of garbage in one of Indonesia's largest dump sites.
Ulet Ifansasti/Stringer/Getty Images News/Getty Images

Humanity exacts a terrifying toll on the planet. After all, everything we build or consume comes out of our environment. It all requires a portion of the world and changes that portion in the process. Varied woodlands become a ubiquitous field of corn. A wilderness becomes a grid of streets, lights and skyscrapers. What's more, we remake the world a little more to our liking every day.

To better gauge civilization's impact on the environment, scientists developed eco-footprint analysis (EFA) to measure just how much land is necessary to support a particular segment of the population's consumption level. By this metric, we can judge how much of a demand individual demographics put on nature.

People in developed countries such as the United States and Japan, for instance, each require an estimated 10 to 25 acres of land to support their lifestyle. That's one heck of a footprint. According to population ecologist William E. Rees, the global average breaks down to 5.4 acres per person. Unfortunately, the planet has only enough bioproductive surface area to allot 4.4 acres to each of its 6.8 billion residents. Human civilization's eco-footprint is already 22 percent beyond sustainable levels.

So far in human history, this insatiable hunger has led to the extinction of countless species, ranging from the woolly mammoths of the Ice Age to the Tasmanian tiger in the 20th century. Even the Neanderthals fell to human clubs and human competition for resources. Other species have thrived, either through cultivation and domestication or reckless introduction into new local ecosystems.

We've turned deserts into farmlands and gorges into artificial lakes; we've erected architectural colossi to house both our living and our dead. Even the atmosphere itself has changed due to our bottomless hunger for resources. Many scientists date human-influenced global climate change back to the Industrial Revolution of the 1800s. Others, such as environmental scientist William F. Ruddiman, insist that carbon dioxide concentrations began to rise 8,000 years ago due to early slash-and-burn agriculture practices.

Pollution has also taken its toll on the environment, poisoning ecosystems with harmful chemicals and littering them with refuse. Garbage dumps have become favored hangouts for advantageous species such as rats and seagulls. Sunken ships and ruined piers have become new underwater habitats.

Along with human enterprise, human conflict has also altered the environment. For example, more than three decades after the Vietnam War, the local ecosystem is still rife with craters, unexploded ordnance and widespread toxic residues that span the entire food chain. Some critics of this form of warfare even go so far as to brand it "ecocide" and petition for its inclusion in international law.

In the centuries ahead, humans may find a way to scale back on their eco-footprint. Likewise, they may learn to manipulate the environment even more or reach out into the solar system for the resources they require.

Explore the links on the next page to learn even more about human civilization.

Kiss Your Beer Goodbye if Climate Change Continues Unchecked
Ethiopia's Church Forests Are Last Oases of Green
What Happens to the Billions of Cigarette Butts on the Beach?