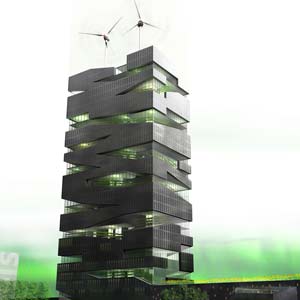 Designs such as this could help solve some of the major environmental and economic challenges facing the planet.
Photo Courtesy VerticalFarm.com

Modern commercial farms are notoriously unsustainable, especially given the world's looming population boom. Farming often demands deforestation, for one: Some experts estimate that to feed the planet's population in 2050, when it could be above 9 billion, we'll need additional arable land the size of Brazil. Bye-bye, rain forest!

Other issues with traditional farming include the heavy use of pesticides, fertilizers and herbicides with the consequent chemical runoff, destruction from invasive and treatment-resistant species, weather-related crop failures, wasted water and depleted soil. Clearly there's an issue here, so enter indoor farming from stage left. Slowly growing in popularity, indoor farming could not only help feed the few extra billion people we'll have hanging around in a couple of decades, it could also conserve precious resources and help reverse climate change.

While that might sound too good to be true, consider some of the potential benefits of indoor farming. When you grow plants (and raise livestock) in regulated facilities, you can constantly control temperature, humidity, water, light and nutrient delivery. In Japan, a company called Pasona began an indoor farm in the unused basement of a skyscraper in Tokyo's business district. Located in a former bank vault, the farm uses an automated control system to grow fruits, vegetables, herbs and flowers -- there's even rice grown in specially designed terraced paddy "fields" built for the purpose.

An even more ambitious idea that's still largely in the conceptual and prototyping stage is known as vertical farming. In order to maximize land use, vertical farming would take place in towering skyscrapers, possibly 30 stories high or more. There are several advantages to consolidated growing space. Land use drops steeply so former farmland can be allowed to return to its natural state, creating vast new carbon sinks. Such a setup would also work perfectly on an abandoned city block: By growing food in urban environments where the majority of us live anyway, the drop in cost and carbon emissions related to shipping could result in huge savings.

Because vertical farms are self-sustained, they function much like factories. The operations can process plant waste and filter dirty water. They can generate power and prevent billions of gallons of wastewater from being dumped in nearby waterways -- something that happens every few days in the average big city.

Put up a dozen or so vertical farms, and all of a sudden you have yourself a self-sustaining closed-loop system that can feed an entire city. Running year-round, weather and pests are never a problem, so people can get all the nutrients they need even when a particular crop is technically out-of-season. Plus, arid or drought-ridden places can conserve massive amounts of water. All in all, it's pretty much a win-win. Now all we need are several specialists and some super-generous philanthropists willing to make it a reality.

What Happens When a Keystone Species Goes Extinct?
Scientists Say: Hey, Hikers, Stop Stacking Rocks!
What 'An Inconvenient Truth' Got Right (And Wrong) About Climate Change