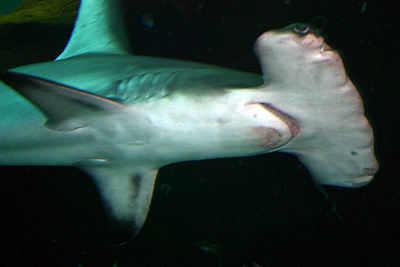 A great hammerhead shark in the Ocean Voyager tank. Even though sharks are predators, they don't typically feed on other animals in their tank as long as they are well fed.

Building the aquarium, a parking deck and exhibits for all these animals was no small task. In the process, the aquarium used:

A skylight over the Ocean Voyager tank lets the fish get natural sunlight on clear days. In this picture, the skylight's louvers are closed.

The Ocean Voyager tank, the largest habitat, holds three-fourths of the aquarium's water. It is 263 feet long by 126 feet wide by 33 feet deep, and it holds 6 million gallons of water. Pens at one end allow staff to separate fish from the rest of the tank, and veterinarians can examine larger animals inside them. A slow-moving conveyor belt takes visitors through a 100-foot acrylic tunnel under the tank, letting them view the fish from below.

Other aquarium exhibits include the 800,000 gallon beluga whale enclosure, smaller tanks and multiple touch tanks where visitors can get hands-on experience with aquatic animals. Many of the tanks use artificial light, but the Ocean Voyager tank, the beluga whale habitat and the large coral reef all receive natural light.

To fill the tanks, the aquarium piped in 8 million gallons of ordinary tap water -- enough to fill 160,000 bathtubs. After treating it to remove chemicals and impurities, the staff had to turn this fresh water into salt water for marine habitats. To do this, they added 750 2,000-pound sacks of Instant Ocean® sea salt, for a total of 1.5 million pounds. That's the equivalent of more than 920,000 containers of table salt.

Next, we'll look at where the aquarium found all of the animals that live in its tanks.