Funding and Running the Aquarium 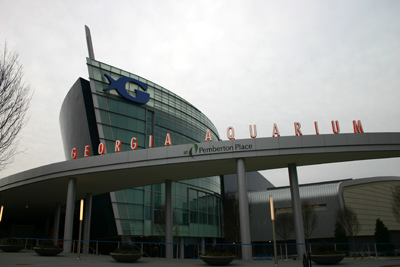 The Georgia Aquarium started with The Home Depot founder Bernie Marcus. Marcus wanted to present a gift to the city of Atlanta and the state of Georgia, one that would encourage education and economic growth. In November of 2001, he announced his plan to build an aquarium in downtown Atlanta. He and his wife Billi donated $250 million toward the Georgia Aquarium's construction.

But they didn't do it alone. Marcus and aquarium staff visited 56 aquariums in 13 countries to do research and gather ideas. They also received financial contributions from AirTran Airways, BellSouth, Georgia-Pacific, The Home Depot, Southern Company and SunTrust Bank, which sponsored the aquarium's five aquatic galleries and its 4-D theater. Turner Broadcasting System sponsored the Learning Loop. People contributed through the Aquarium's FishScales program, and other corporations, like UPS, made in-kind donations. Even the land was a donation -- nine acres came from The Coca-Cola Company. With all this financial help, the aquarium opened debt-free.

Groundbreaking for the aquarium took place in May 2003, and it opened to the public on November 23, 2005. Construction of the 550,000 square foot facility took only 27 months, and a 1,600-car parking garage was built at the same time. In addition to the animal habitats, the aquarium houses a gift shop and a 4-D theater. It also has a 16,400 square foot ballroom and food-service kitchens. The heating, ventilation and air conditioning (HVAC) system, which must precisely maintain temperatures around the animal habitats, can make 9,000 decisions per minute and has a capacity equivalent to 1,200 average-sized homes.

A whale shark swimming with a school of golden trevally. Backstage tours at the aquarium give visitors a chance to see the sharks from above.

More than 200 people work at the aquarium, and about 1,000 trained volunteers donate their time. The aquarium has security staff as well as 99 video cameras and 97 proximity card readers. Everyone who visits the aquarium must go through a security check, and guns, knives, matches and lighters are not allowed inside. To further protect the safety of the fish, the aquarium prohibits straws, which can be harmful if thrown into exhibits, from the on-site restaurant, Café Aquaria.

Marcus and the aquarium staff hope that the aquarium will be completely self-sustaining, able to support itself through admission fees and rental of the ballroom and other meeting spaces.

Check out the links below for lots more information about the Georgia Aquarium and aquatic wildlife.

Built to American Zoo and Aquarium Association standards, the design and building of the Georgia Aquarium included: