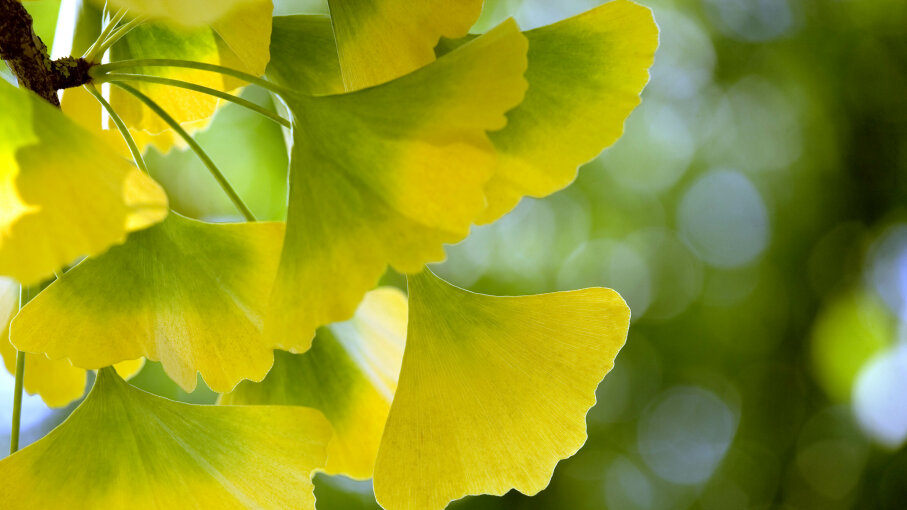 The ginkgo tree (Ginkgo biloba) is native to China and has been found in fossils dating back 270 million years. RelaxFoto.de/Getty Images

You might have a ginkgo tree in your neighborhood — it has wispy, fan-shaped leaves that turn a beautiful burnished yellow in the fall, and possibly drops rotten-smelling fruit. It looks different from other trees you see on the street, mostly because when you look at it, you're looking at the product of another time. Ginkgo biloba is the oldest tree on Earth; it has outlived all its relatives and has seen the dinosaurs rise and fall. In fact, gingko trees have remained pretty much unchanged for the past 270 million years, have survived three mass extinctions, and might be a key to helping us understand something about how our current climate shifts will affect organisms in the future.

A group of researchers at the Smithsonian Environmental Research Center in Edgewater, Maryland, are studying a grove of 15 ginkgo trees, each housed in a plastic greenhouse tent and hooked up to a tank of carbon dioxide (CO2) that delivers different amounts of the gas to each tree — some up to two and a half times the CO2 concentration of modern Earth.

In this experiment, called Fossil Atmospheres, the scientists are trying to reconstruct how the atmosphere of Earth has changed over the past couple geologic eras — through ice ages and periods when there was no ice at the poles at all — and how it's likely to change in the future.

The Earth's atmosphere is made up of a variety of different gases, including CO2, the concentrations of which have a huge impact on the planet's climate. Scientists can get a pretty good idea of what past climates were like by looking at fossil plants, thanks to a little structure on the surface of their leaves called stomata — little holes that let CO2 into the leaf and water and oxygen out. The concentration of CO2 in the air determines how many stomata are on the surface of the leaf. Using fossils of gingkos from different places and time periods can help the researchers put together a story of what Earth's climate has been up to for the past few hundred million years.

The researchers are doing all kinds of experiments with their tented fossil atmospheres, but they also want your help. You can assist in this project by volunteering to help count stomata on fossil gingko leaves, in order to calculate the levels of CO2 in the atmosphere during specific periods in the deep, deep past. You can also send in gingko leaves from wherever you live because, although gingkos are native to China, they're popular in yards, gardens and along streets worldwide. By receiving specimens from citizen scientists from all over the globe, the researchers will be able to get a better sense of how various features of the trees differ depending on whether they're planted in Singapore or Colorado, which will in turn help them to better understand how ginkgo grow differently, depending on the climate in which they developed — now or 200 million years ago.

Now That's Interesting
The oldest known ginkgo specimen stands in the Zhongnan Mountains of China and is 1,400 years old.