A clockwork lion statue revealed in London today aims to draw attention to the plight of the endangered big cats. The statue, constructed out of more than 500 different clock gears and parts, joins the pride of traditional lion statues in the U.K. city's Trafalgar Square.

Created by U.K. publicity firm Sketch Events, the lion comes complete with ticking sound effects, to underline the fact that the wild lion population is diminishing.

National Geographic, who's sponsoring the statue to coincide with its #BigCatWeek social media campaign, estimates there are as few as 30,000 lions remaining in the wild. That's only 2.5 percent of the 1.2 million lions estimated to live in the world in the 1800s, and down from 450,000 just 70 years ago.

The clockwork lion, a temporary installation, joins four bronze lions in Trafalgar Square. Completed in 1867 as part of the Nelson's Column sculpture, the lions have become popular with both tourists and as a rallying point for political protests and demonstrations.

Once the publicity event wraps up, the clockwork lion will be auctioned off, with proceeds going to National Geographic's Big Cats Initiative.

Who's Your 'Backup Plan'? Now There's an App to Seal the Deal

More Than a Hashtag: Can Social Media Help Save Endangered Species? 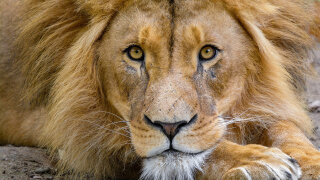 Lions: 5 Roaring Facts About the King of the Beasts