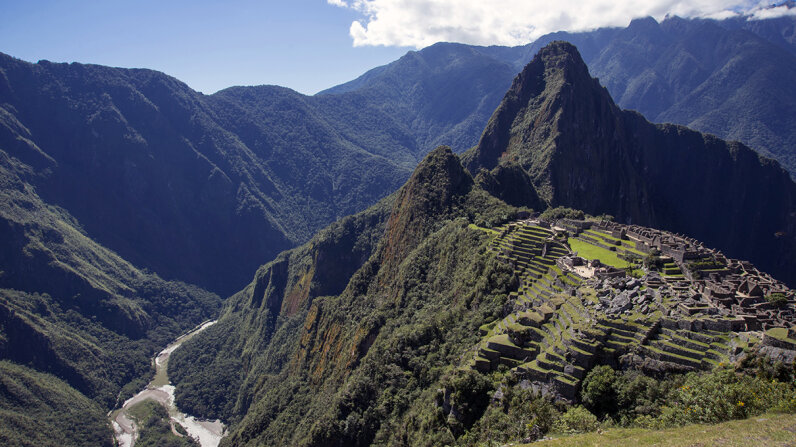 Many of the forests in Peru, like the Sacred Valley seen here, are part of the country's national park system, as well as UNESCO's World Heritage Sites. JTB Photo/UIG via Getty Images

While a small minority of scientists and other skeptics still debate the "truthiness" of global warming, an overall consensus remains: Thanks to human-caused climate change, the planet is heating at a rate not seen in the last 800,000 years, at least.

And while many studies and entire books have investigated the current — and future — effects of human activity and/or a warming planet, a new report out of the University of Exeter in Great Britain and the University of Queensland Australia is taking a "glass is half full" approach to explain the predicament, and to argue the need to save more tropical forests.

The study, published in the October 2017 journal of Scientific Reports, estimated how much carbon did not enter the atmosphere because of previous efforts made to preserve vast swaths of tropical forests in South America, Africa and Asia. It's the first study to look at the impact of protected forests on carbon emissions reduction.

The study authors focused on the years 2000 through 2012. The areas they studied make up 20 percent of the world's tropical forest, providing habitats for a wide range of species, as well as land for historic sites like the Incan ruins of Machu Picchu in Peru.

According to the audit, protected national parks and nature reserves — which the study says make up as much as 15 percent of Earth's total land surface — reduced carbon emissions worldwide by a third. In other words, if nothing had been done nothing to protect these lands, and the forests were instead used for fuel or agriculture, climate change would be accelerating at a much faster pace.

As a reminder of carbon's part in global warming: One atom of carbon merged with two oxygen atoms transforms into carbon dioxide, the heat-trapping greenhouse gas that is a leading cause of our warming planet.

The study authors, Dr. Dan Bebber of the University of Exeter, and Dr. Nathalie Butt of the University of Queensland, estimate the protected tropical forests in the study prevented 407 million tons (369 million metric tons) of carbon from entering the atmosphere every year from 2000 to 2012. That translates into 1.5 billion tons (1.4 billion metric tons) of carbon dioxide.

By comparison, Great Britain put out an estimated 381 million tons (345 million metric tons) of carbon in 2016 — and that was its lowest carbon-producing year since the 19th century.

"Tropical protected areas are often valued for their role in safeguarding biodiversity," Bebber said in a press release. "Our study highlights the added benefit of maintaining forest cover for reducing carbon dioxide emissions to the atmosphere, so helping slow the rate of climate change"

The ultimate message of the research findings? Save more forests. And not just because they serve as homes to a wide range of species.

Now That's Scary
As NASA tracks it, carbon dioxide levels in our atmosphere are higher than they've ever been over the course of the Earth's last three glacial cycles — a period covering 400,000 years.