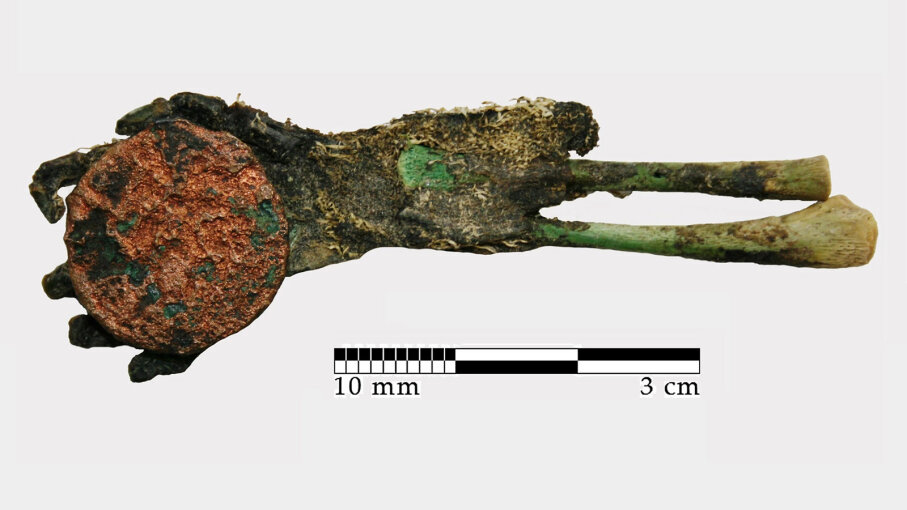 The copper coin responsible for the mummification of the baby's hand is easy to discern in the picture. Janos Balázs/University of Szeged

Imagine opening a dusty box shelved away in a research facility. Inside you see some small bones, a few antique artifacts, and ... a tiny mummified hand colored an eerie shade of green. Would you shriek in terror? Would you worry it was a harbinger of some terrible curse? Would you at least see if the mummified hand could grant you a wish or two?

Remove the literary shock value, and that's precisely the dilemma that presented itself in 2005 when Dr. Janos Balázs, a biological anthropologist at Hungary's University of Szeged, and his colleague Zoltán Bölkei investigated a box filled with small bones and the mummified hand of a human baby found in central Hungary. Though discovered in a medieval cemetery, the remains of the baby — premature, miscarried or stillborn, according to the researchers — date back only to the second half of the 19th century.

But how was the baby's hand mummified? And why wasn't the rest of its body equally preserved? To answer this mystery, the researchers looked to the artifacts found alongside the human remains. A small ceramic pot and corroded copper coin were part of the burial package. The researchers found that the copper coin exactly fit in the baby's hand and surmised that copper from the coin leached into and preserved the organic material.

Their findings were published in a paper in the journal Archaeological and Anthropological Sciences. The paper details that the mummified hand contained copper levels 497 times higher than would be expected, and that another baby found at the site buried without a coin did not show similar mummification.

"According to ethnographic references, newborns who died without being baptised were rolled up in some sort of textile and buried in a pot (for example a milk-jug) or a small wooden box in abandoned cemeteries usually located close to ruins of medieval churches," the authors write in the paper and point out that low-value coins were occasionally placed next to or in the hands of a corpse as an offering to the afterlife.

In its metallic form, copper is antimicrobial, and can rapidly kill bacteria, yeasts and viruses. Ancient civilizations knew of copper's microbe-fighting powers. In fact, one of the oldest books ever discovered is an ancient Egyptian medical text known as the Edwin Smith Papyrus; dating back to between 2600 and 2200 B.C.E., it describes using copper to sterilize chest wounds and drinking water.

The practice continues to this day. Researchers proposed in 2009 using special copper drinking vessels to sterilize water in areas where other antibacterial medicines and applications are less common. Could future archaeologists one day find a bare-bones skeleton with a pair of mummified lips? Time will tell but enjoy your nightmares.