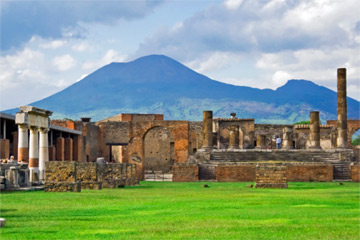 Vesuvius looms over Pompeii, the city that has enthralled archaeologists since the 16th century.
Hemera/Thinkstock

Identifying the biggest archaeological find in history is sort of like naming the best movie ever made. One person's blockbuster could be another person's bust. Still, there are ways to make the decision less subjective. One way requires a checklist to help evaluate the merits of various archaeological finds. Our handy checklist contains five questions:

We applied these questions to a who's who of archaeological discoveries. For example, we considered the Rosetta Stone, an ancient Egyptian stone bearing three languages that enabled scientists to decipher hieroglyphic writing. We considered the Dead Sea Scrolls, a collection of manuscripts found on the northwestern shore of the Dead Sea that provided insights about the rise of Christianity and the relationship between Christian and Jewish traditions. We considered the tomb of Tutankhamen, the boy king who ruled Egypt between 1333 and 1323 B.C. And we considered "Lucy," a 3.2-million-year-old hominid -- Australopithecus afarensis -- discovered in Hadar, Ethiopia, by Donald Johanson.

But our choice for biggest archaeological find in history is not a stone, a scroll or a skeleton -- it's Pompeii, an ancient city located on the plain of Campania in southern Italy. Pompeii was founded in the 6th century B.C. and became incorporated into Rome by 80 B.C. As a Roman colony, the city bustled with life and activity, supporting somewhere between 10,000 and 20,000 inhabitants.

Then a series of man-made and natural disasters struck the city. First, in A.D. 59, a riot between the Pompeians and the Nucerians erupted in the amphitheater. Next came an earthquake, which destroyed much of the city in A.D. 62. Finally, on Aug. 24, A.D. 79, Mount Vesuvius erupted and buried Pompeii beneath nearly 9 feet (3 meters) of ash, pumice and other volcanic debris. The city lay undiscovered -- and almost perfectly preserved -- for almost two millennia. Formal excavations began in 1748 and have continued to this day. 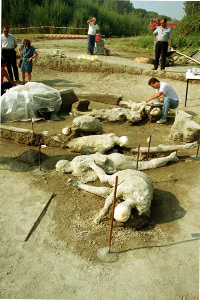 Another Avellino Eruption on the Way?

Maybe you're beginning to get the idea why we selected Pompeii. So far, it's yes, yes and yes, in case you're keeping track. Let's address those final two questions we asked about the biggest archaeological find in history.

Does the find capture the imagination of non-scientists?

From the moment it was discovered, Pompeii galvanized the interest of people all over the world. As word of the excavations spread, visitors flocked to the site to see the ruins for themselves. Artists came, as well, and after viewing the mosaics, frescoes and architecture of the city, infused their works with Pompeii's Neoclassic style. Today, more than 2 million people make the trek to the ancient city each year.

Does the find help prepare us for the future?

Given the violent history of Vesuvius, geologists now worry that Naples and the surrounding areas could face a similar catastrophe at any moment. In 2005, a team of scientists led by Giuseppe Mastrolorenzo and Michael Sheridan published a paper in the Proceedings of the Natural Academy of Sciences in which they used the Avellino event as a worst-case scenario for a future eruption of Vesuvius. Based on their analysis, Sheridan and Mastrolorenzo calculated that the odds of a significant eruption increase with each passing year. They also predicted that such an event would be big enough to threaten people as far away as Naples and encouraged the city to update its emergency plan accordingly.

It is, perhaps, this glimmer of the future that elevates Pompeii above other archaeological treasures. If lessons from A.D. 79 can help protect millions of people from a future eruption of Vesuvius, then it truly is a find among finds.