Browse the article What can we learn from geoarchaeology? 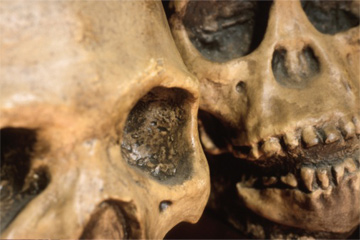 With geoarchaeology, the bones aren't the whole story.
Hemera Technologies/Photos.com/Thinkstock

In the late 1980s, images from a space shuttle and Landsat satellites found a spiderweb of thin lines converging to a point in the middle of the Arabian Desert. Legend had it that Ubar -- an ancient city long lost to the blazing, windswept sand -- once provided refuge to travelers moving along the frankincense trade route that snaked through the vast wilderness.

Although people tried to find Ubar for centuries, the city remained as mysterious as Atlantis. But the lines seen in the Landsat images were too organized to have appeared naturally. They seemed to suggest the existence of a man-made structure, such as a cemetery or a city. In 1990, archaeologists arrived at the site and began digging. Eventually, their excavation uncovered the walls of what many now believe is the lost city of Ubar.

Here's one major reason why: It reduces our reliance on chance discoveries about human history. For ages, serendipity has played a major role in how archaeologists came to know about a site of historical significance. For example, a construction or quarry project would turn up ancient soil and the material remains it held. Once the site was known, archaeologists showed up, shovel and trowel in hand, and started digging. They sifted the dirt and collected artifacts that provided clues of ancient human activity. They paid little attention to the soil deposits, which they scooped, scraped away and removed in buckets. Instead they focused intently on the artifacts and features of the site being explored.

Geoarchaeologists are just as interested in uncovering the story of past human activity, but their methods differ. The soil itself holds their interest as much as anything buried in it. They record changes in soil texture, color, density and smell. Sometimes they don't even dig at all, choosing instead to look at satellite images or data from seismic readings, which was what led them to Ubar.

Keep reading to find out what other tricks geoarchaeologists have up their dusty, khaki sleeves.

Researchers currently use a variety of geoarchaeological techniques to to explore hidden sites and examine buried artifacts without conducting a major excavation. For example, a simple soil auger, which uses sharp blades attached to a hollow cylinder to drill into the earth, can reveal a great deal about sediments lying beneath the surface. Most augers bore small holes and reach depths of 26 feet (8 meters). Scientists analyze the soil samples removed by augers to detect archaeological deposits and determine how far they extend laterally. Once their probing finds evidence of promising deposits, researchers can begin a more significant excavation.

Remote-sensing technologies offer geoarchaeologists more sophisticated options to find hidden sites. For example, ground-penetrating radar uses low-frequency waves to produce an image of deeply buried artifacts and features. These waves penetrate to depths of 33 feet (10 meters), and as they encounter various deposits or remains, they produce an echo that helps to define boundaries and object shapes. The deeper the material, the longer it takes the echo to travel back to the surface. This indicates the depth of the material.

When digging finally begins, geoarchaeologists often spend much of their time "reading" the soil for clues. One major goal of this process is creating landscape histories of a specific geographic region. A landscape history answers key questions about an ancient environment. Did sea levels rise? Did rivers overflow their banks? Did a volcano erupt nearby? The answers are held in how soils are deposited. For example, the presence of dark soil layers indicates buried topsoils. Because topsoils take a while to form, they usually indicate a stable landscape -- and a place where an ancient settlement may have been located. By the same token, areas of sediment erosion and storage provide telltale signs of how a river changed its course over time.

Piecing together a landscape history enables scientists to predict where buried cultural deposits are likely to occur. In the Great Plains, archaeologists used these techniques to make a startling discovery about early Americans. Until recently, most anthropologists believed that ancient humans crossed the Bering land bridge about 11,500 years ago and began migrating across North America. But landscape histories in Iowa and Kansas have led to excavations revealing much older sites and indicating that humans settled the continent earlier than expected.

Ultimately, this is what geoarchaeology provides -- a richer and more detailed story to accompany an excavation. Scientists call this story archaeological context, and they rely on it to interpret artifacts, understand their meaning and tell the nearly 200,000-year history of humans.