Researchers have found a new set of human remains at the same site where the Antikythera Mechanism, one of the most compelling and mysterious underwater finds of all time, was discovered. Found in Mediterranean waters near the Greek island of Antikythera, the skeleton of a shipwreck passenger or crewmember was uncovered at the same archaeological site that produced the enigmatic device.

The Antikythera Mechanism, an intricate computational artifact that served as a type of calendar, has long fascinated the world. Learn more about it by listening to this podcast from our Stuff You Missed in History Class colleagues:

Discovered and first salvaged by Greek sponge divers 116 years ago, the Antikythera shipwreck —a boat believed to be carrying grain shipments when it sank around the year 65 B.C.E. — is the largest ancient shipwreck ever found. It's currently the site of ongoing research from an international team of divers and archaeologists led by Greece's Ministry of Culture and Sports and the Woods Hole Oceanographic Institution.

There's little information available currently about the person this skeleton discovered on Aug. 31, 2016 once belonged to — sex, age and manner of death have yet to be determined, though researchers say the remains including leg and arm bones and a near-intact skull are remarkably well preserved given that it's been at the bottom of the Aegean Sea for 2100 years.

While this isn't the first skeleton found at the Antikythera shipwreck site — Jacques-Yves Cousteau and his team aboard the ship Calypso found human remains there in 1976, for instance — it is the first discovery of remains since the advent of advanced DNA studies. Plans are to send DNA samples to a lab in Copenhagen, with the hopes of identifying the ethnicity and geographic origin of the long-dead shipwreck victim.

"Against all odds, the bones survived over 2,000 years at the bottom of the sea and they appear to be in fairly good condition, which is incredible," said Hannes Schroeder, an ancient DNA expert from the Natural History Museum of Denmark, in a press release announcing the find.

There's no link between the skeleton and the famous ancient device — after all, there's no label saying "This Antikythera Mechanism Belongs to Dimitrious" or anything along those lines — but a greater understanding of who was aboard the ship and where they came from can illuminate our understanding of the ancient world.

A human skull and long arm and leg bones at the Anitkythera shipwreck site, photographed before removal.
Brett Seymour/EUA/WHOI/ARGO
The skull found at the shipwreck site was nearly intact, and included the fragile including the cranial parietal bones shown here.
Brett Seymour/EUA/WHOI/ARGO
Now That's Cool
To let the public and other researchers examine their finds, the Antikythera research team creates digital 3-D models of artifacts found on the site — and that includes several models of these new skeletal remains. 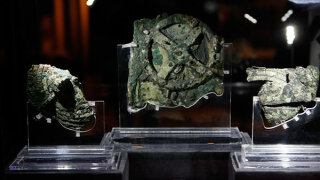 Stuff You Should Know: How the Anitkythera Mechanism Works [AUDIO PODCAST] 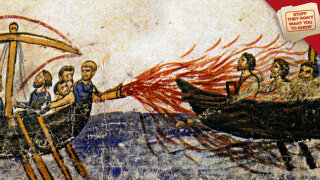