In the remotest part of North Africa, near where the borders of Egypt, Libya and Sudan all meet but mean very little in a place far from populated areas, a sandstone plateau called Gilf Kebir sits baking in one of the most punishing climates on Earth. But that 3000-square-mile (7770-square-kilometer) plateau quietly harbors the richest and most important collection of prehistoric cave paintings in the Sahara.

Egypt's Gilf Kebir is the driest place on the planet, but that wasn't always the case. The Stone Age rock art in the southwestern corner of the plateau, at a site called Wadi Sura, harkens back to the days of the "Green Sahara," when environmental conditions in the area were much more tolerable to living things. A new study of some 8,000-year-old pictographs at Wadi Sura, shows that, in addition to giving a glimpse into a largely unstudied prehistoric society, Wadi Sura stands as a testament to how differently our ancestors viewed the relationship between humans and animals.

Researchers have been puzzled by tiny hand stencils inset within those from adult humans.
Emmanuelle Honor

Discovered in 2002, the art in the nearby Wadi Sura II, dubbed "The Cave of Beasts," depicts humans cavorting in a Neolithic wonderland with a staggering density and diversity of animals. Amid hundreds of outlines of human hands, more than 5,000 ostriches, giraffes, gazelles and elephants, as well as fantastical beasts, either swallow or spit up human figures, while others trot around on human legs, and mingle with dense groups of human figures.

New research, led by Dr. Emmanuelle Honoré of St. John's College at Cambridge University, examined some of the puzzling human hand stencils at the site — specifically some adult hands with tiny hands stenciled inside them. Were they stencils of baby hands? Or were they evidence of something decidedly non-human?

"I was really shocked the first time I saw those tiny hands," says Honoré. "While other researchers were moved by the symbolism of human baby hands in the pair of adult hands, for me they were not evoking human hands at all, with the shape of their fingers pointed at the end like a claw, the shape of the hand, and above all the proportions of the fingers compared to the palm."

The hand-stencil art in the Wadi Sura II cave dates back more than 7,000 years.
Emmanuelle Honor

Although evidence of animal body or paws stencils were completely absent from the rock art of North Africa up to now, Honoré decided to test her hypothesis that these hands might not be those of human children after all. She observed monkeys in Zambia, spent time comparing the handprints to specimens at the Museum National d'Histoire Naturelle in Paris, and contacted zoos and research institutes all over the world to see if anyone recognized the little clawed mitts. Meanwhile, Honoré took measurements of human babies in a hospital neonatal unit, and found the small hands at Wadi Sûra II were tinier than those of even the smallest infants.

As a result, Honoré and a team of team of primatologists, anthropologists, hand morphology specialists and medical doctors specializing in neonatology concluded the tiny hands were not, in fact, human.

But then, to what, or whom, did those hands belong?

"The results of the comparative study with [the desert monitor lizard] Varanus griseus griseus were by far the most convincing," says Honoré. "Now we are investigating the crocodile hypothesis. We are not sure whether it will be possible to get a definitive answer among reptiles, but our preliminary results are very promising."

These results, in addition to the other scenes at Wadi Sûra II, suggest a society that lived in very close relationship with animals. But just why would humans feel the need to stencil the hands of reptiles atop images of their own? Honoré is careful not to overinterpret what this meant about the ancient peoples who lived at Gilf Kebir.

"A lot of scenes at Wadi Sûra II display humans performing social activities: not only hunting or fighting, but also dancing or fussing around fantastical beasts," says Honoré. "The excavations done in the shelter have revealed that the soil is sterile from any archaeological material. Therefore, it is very complicated to speculate on the activities performed in the shelter of Wadi Sûra II, aside from painting."

Sometimes art — even the most mysterious kind — simply speaks for itself.

Now That's Interesting
Wadi Sura was discovered in 1933 by László Almásy, a Hungarian count and desert explorer who was the inspiration for the protagonist in Michael Ondaatje's 1992 novel "The English Patient." Both the book and its movie adaptation depict the “Cave of Swimmers,” in which human figures dive and doggy paddle across the sandstone cliffs.

#nopeface: One Universal Expression That Says 'Not' Across Cultures

There’s a Study on That: The Stone Age Had Just as Many Lefties 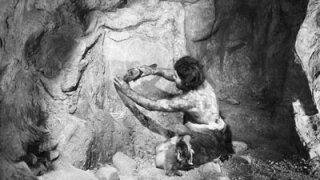