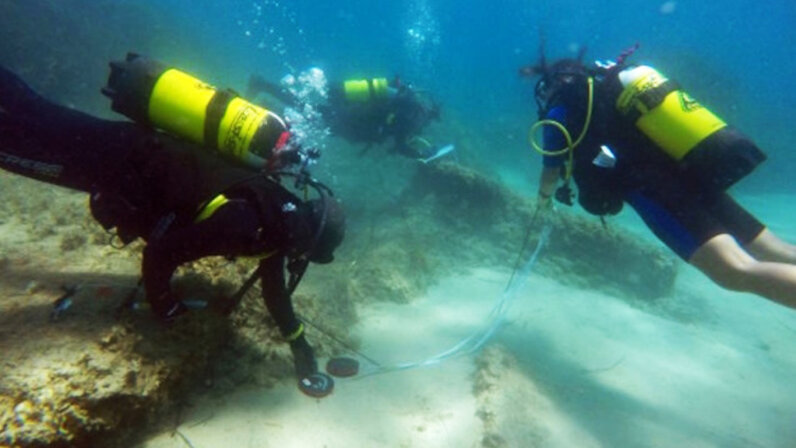 Archaeologists recently discovered more than 50 acres (20 hectares) of Roman ruins submerged off the coast of northeastern Tunisia, believing they may have finally found convincing evidence that the city of Neapolis existed. Tunisian National Heritage Institute and the University of Sassari

Historians have long speculated about an epic disaster that leveled a city and killed thousands. But there's been little evidence to support that theory — until now.

Archaeologists recently discovered more than 50 acres (20 hectares) of Roman ruins off the coast of northeastern Tunisia, a small country on the northern tip of Africa and situated on the Mediterranean Sea. The discovery has researchers believing they may have finally found some convincing evidence that the city of Neapolis (not to be confused with the Italian city by the same name) was wiped out by a natural disaster about 1,650 years ago. In addition to streets and monuments, researchers found about 100 tanks that would have been used to produce a garum, a fish-based fermented condiment commonly consumed in ancient Rome.

"This discovery is important because it lends support to the theory that Tunisian Neapolis was submerged by a tsunami in the 4th century A.D. — a useful reminder that environmental catastrophe is not only a phenomenon of the modern world," Carlos F. Noreña, associate professor of history at the University of California, Berkeley, says in an email.

Scientists wrote in a 2013 study in the journal Nature that a tsunami was caused by an earthquake that occurred in 365 C.E. in Crete. There's no surefire way to know the extent of the quake since measuring tools didn't exist at the time, but scientists believe two separate tremors happened in succession and the larger one had a magnitude of 8.0 on the Richter scale. The resulting tsunami destroyed about 50,000 homes and killed approximately 5,000 people in the city of Alexandria, Egypt. And because the geological fault at the center of the earthquake was located off the coast of Crete, that Greek island was actually lifted up in certain areas by as much as 33 feet (10 meters).

Historian Ammianus Marcellinus recorded the event, and the newly found ruins reveal that there's much more to the story. "The discovery also illuminates the economy of Roman North Africa, and provides further evidence for the popularity of garum in the Roman diet," Noreña says. The detail is significant; garum was a big deal throughout the Roman Empire, and as Italian archaeologist Claudio Giardino told NPR, it played a major role in the society's economy.

"According [to] the Roman writers, a good bottle of garum could cost something like $500 today," he said. "But you can also have garum for slaves that is extremely cheap. So it is exactly like wine."

The underwater findings of Neapolis and its abundant manufacturing materials indicate that the city was a major historical hub. "This discovery has allowed us to establish with certainty that Neapolis was a major centre for the manufacture of garum and salt fish, probably the largest centre in the Roman world," head researcher Mounir Fantar, told AFP.

Neapolis — which means "new city" in Greek — was originally founded in the fifth century B.C.E., and various warring territories claimed ownership of it throughout its history. Experts believe that because the city failed to pledge allegiance to the Romans, there are very few written records documenting the details of life there. That means the new discovery is that much more important to understanding the full history of the era.

"Our picture of the Roman Empire tends to be dominated by Rome and the other major cities," Noreña says. "But it was in the smaller provincial centers such as Neapolis that the rhythms of everyday life in antiquity are to be found."

Now That's Interesting
If you want to re-create garum yourself, there's a cookbook for that: Food historians Andrew Dalby and Sally Grainger's "The Classical Cookbook: Revised Edition" includes garum as a salt substitute and as a base for sauces and dips.