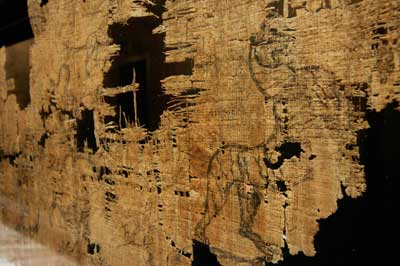 The Rosetta Stone made it possible to read more than a thousand years of Egyptian history. The West used to marvel at the civilization simply because it was old, but this new wealth of information inspired an enthusiastic interest in Egypt. Aided by innovations in travel during the Industrial Revolution, Egypt became a popular destination for Westerners to visit. Doctors even recommended the country as a healing site for its warm, dry weather. Westerners pored over books about Egypt and others adorned themselves in Egyptian-inspired fashions.

Part of Napoleon's master plan was for France to reveal Egypt's mysteries to the world. His Institute was rather limited by not being able to read hieroglyphics. Many of the scholars' findings were based on empirical evidence, or conclusions drawn from their observations. Not all of their conclusions were accurate. For instance, they estimated the temple at Dendra to be very ancient, but it was actually built in the Greco-Roman period (332 B.C. through 395 A.D.) [source: BBC].

Despite errors and holes in their research, Napoleon's scholars pooled their observations together into 19 volumes. The Institute's compilation was completed in 1822 and published under the name "A Description of Egypt." It was displayed in the Louvre in 1825 and accompanying maps were added to it in 1828 [source: International Napoleonic Society].

The compilation became enormously popular throughout Europe. Egypt became a subject of intrigue for the masses as well as the scholars -- tales of mummies, magnificent tombs and immeasurable riches appealed to everyone. Cracking the hieroglyphic inscription on the Rosetta Stone was just the first step: It would take years to sift through the stacks of papyri and scan the walls of monuments to get a bigger picture of ancient Egyptian history. Plenty of scholars were willing to devote themselves to the study of the civilization. As a result, Egyptology, or the study of ancient Egypt, evolved into a legitimate science as well as a topic of popular culture.

Scholars flocked to Egypt to study the ruins, archives and artifacts. Writers like Gustav Flaubert and Charles Dickens brought Egypt into the imaginations of people who could not travel there. Many artifacts were shipped to Europe for safe-keeping. Egyptians who didn't realize the value of their artifacts had been selling them to collectors for years. During the Middle Ages, countless mummies had been sold to European doctors, who believed that ground-up mummified remains were a cure-all for disease.

Egyptologists argued that if artifacts weren't shipped to Europe and placed in museums, they'd be sold or lost forever. Champollion campaigned to have these items placed in the Egyptian National Museum. He countered that scholars didn't know how to properly care for them, either. Papyrus, for instance, should be stored in bamboo containers in non-humid environments: When Egyptologists transported them by ship to the West, the papers crumbled to dust [source: Ceram].

In 1895, the Egypt Exploration Fund was established to support museums' acquisitions of Egyptian art and antiquities. Developments in archaeology allowed scholars to piece together even more of Egypt's mysterious past.

Today, Egyptologists engage in studies and excavations to reveal new aspects of ancient Egyptian culture. Many universities include Egyptology as a degree program. In popular and academic culture, our fascination with ancient Egypt is in no small part due to the Rosetta Stone.

For more information on the Rosetta Stone, Egyptian history and related topics, check out the links below.