What can we learn from urban archaeology?

Digging in cities is a great way to learn about how human civilizations formed.
David Silverman/Getty Images

When you think of an archaeological dig, or excavation, you probably have visions of desert landscapes, with researchers on their hands and knees, brushing sand from an ancient skeleton. While this is a realistic image for many archaeological digs, it's not an accurate picture for another type of archaeology: urban archaeology.

Imagine a city block. Pedestrian and automobile traffic congest the asphalt underfoot. Now imagine a researcher on his or her hands and knees, brushing dirt from a more recent artifact. That's what urban archaeology looks like, and like all forms of archaeology, we can learn a lot from it.

The basics of urban archaeology are the same as the basics of non-urban archaeology. But with urban archaeology, the idea is to look for clues about our past in cities -- areas that have been developed for hundreds of years. Pick any major city and you can bet that much of the area has a rich history of past dwellings and landscapes beneath the concrete below. It wasn't until the 19th century that civilizations began to remove refuse from construction projects. Before that, refuse was buried, reused, or broken down and trampled on until a new structure was built on top. Because of this, cities are higher in elevation than they used to be, the land literally raised by the debris of the past. Cities that have burned, like Atlanta, Ga., which burned during the American Civil War, and London, England, are even more likely to have a rich bevy of past relics beneath.

There's one hitch to urban archaeology: You can't just dig through any city street. Urban archaeologists must be opportunists, hitting the scene whenever a new construction or redevelopment project begins. For example, in the 1970s, when a new parking lot was built in Paris, medieval and post-medieval artifacts were unearthed. The castle of Charles V was found beneath the building site of the Louvre Museum and was actually used in its construction. In the United States, freeway and subway projects in Atlanta, New York, Philadelphia, Boston and Seattle became some of the first domestic urban archaeological sites.

Before a site is excavated, a great deal of research about the area's history must be done to tell a researcher whether or not the site is an area of opportunity. Dirt is usually hauled away because of a lack of space, and security is a must. Aside from these differences, urban archaeology is much the same as traditional field work at sites far from civilization. Instead of learning about an ancient king, we learn about our more recent past, how neighborhoods were settled and how our previous neighbors may have lived. 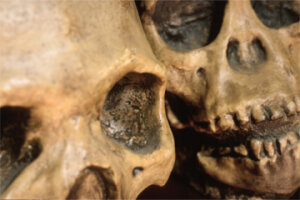