by Jesslyn Shields Feb 22, 2017
The Colorado River makes its way through the iconic Horseshoe Bend in Arizona. Filippo Bacci/Getty Images

We hear about the impacts of climate change all the time — desertification in China, giant fissures in Antarctic ice, acid sea waters, shrinking habitat for Arctic wildlife. But for those in the contiguous United States, extra-balmy winter temperatures and summers that seem oppressively, scorchingly hot comprise most of our in-person climate change experience. It's not as conspicuous as a polar bear floating on an iceberg the size of a matchbook, or a miles-long swath of dead coral reef.

But a new study in the journal Water Resources Research focusing on the flows in the Colorado River points to a new 21st-century climate spectacle to ogle: The river, which provides drinking water for 2 million people per year, is drying up as a result of higher temperatures and lower precipitation in the Colorado Basin.

Between the years 2000 and 2014, flows in the Colorado, which meanders through seven states in the American West and into Mexico, averaged only about 81 percent what they were during the 20th century. According to the authors from the University of Arizona and Colorado State University, between one sixth and a full one half of this reduction in flows can be attributed to the higher temperatures we've experienced so far this century. The models the authors developed to project future temperatures and river conditions suggest even lower flows to come, with losses of between 35 and 55 percent by the end of this century.

This, of course, is alarming news for wildlife and those who love to boat, fish and swim in the recently drought-prone Colorado, but since the river and its tributaries have been getting an average of about 2.9 million acre-feet less water per year than average since the turn of the century — an acre-foot is enough water to satisfy a family of four for a year, according to the U.S. Bureau of Reclamation — this is also bad news for everybody else living in the Colorado basin.

"The future of Colorado River is far less rosy than other recent assessments have portrayed," said coauthor Dr. Bradley Udall, of Colorado State University's Colorado Water Institute, in a press release. "A clear message to water managers is that they need to plan for significantly lower river flows."

The models created for this study can predict temperatures, but although future rainfall is more difficult to determine, Udall suggests, "a megadrought in this century will throw all our operating rules out the window."

The Colorado River pictured five miles from its source in the Rocky Mountains.
raclro/Getty Images
Glen Canyon in Southern Utah was formed by the flow of the Colorado River.
Brian Downs/Getty Images
Now That's Concerning
According to the study, so far this century, the temperatures in the Colorado River's headwater states of Wyoming, Utah, Colorado and New Mexico were about 1.6 degrees F (0.9 degrees C) higher than the average for the 20th century. 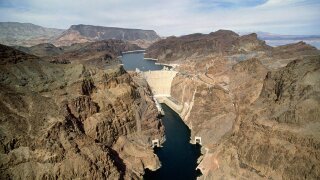 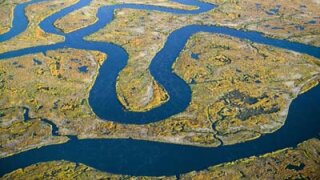