Marine Animals that Swam with Dinosaurs 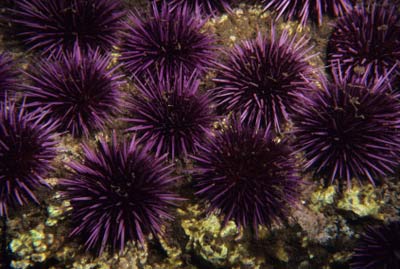 Sea urchins are one of the many echinoderms that thrive today.
Tammy616/iStockphoto

Except for possible excursions to find food, reproduce or just cool off, dinosaurs were not aquatic. However, there were lots of sea-dwelling animals during the Mesozoic Era. Plesiosaurs were long-necked, finned reptiles. Think of the Loch Ness Monster, and you've got a pretty good idea of what one looked like. Ichthyosaurs looked more like dolphins, and mosasaurs bore a passing resemblance to thick-bodied, finned eels with overlapping scales.

Along with many other marine life forms, all of these animals became extinct during the K-T event. Many members of some of today's marine groups also experienced heavy losses. Some of these included:

After the K-T event, these and other marine life forms eventually recovered and went on to thrive and diversify. The clams, snails, lobsters, crabs and shrimp that make their way to the mouths of oceanic carnivores and the plates of hungry humans come from predecessors that, one way or another, lived through the K-T event. Sharks also inhabited the world's oceans long before the first dinosaur made its way across the land, and they're among the most well-known oceanic predators today.

Although they didn't exist during the Mesozoic era, lampreys bear a resemblance to Mesozoic sea life.
Pedre/iStockphoto

But a few of today's species are the only remaining examples of long-extinct marine families. Today's hagfish and lampreys bear a resemblance to the now-extinct ostracoderms, which were jawless fish. But the most well-known throwback to Mesozoic marine life may be the coelacanth, the last known marine sarcopterygian. Sarcopterygians were lobe-finned, bony fish. There are plenty of other sarcopterygians in the world, though -- the four-legged, vertebrate tetrapods arose from ancestors that diverged from the sarcopterygians long before the Mesozoic Era.

Scientists thought coelacanths were extinct until the 1930s, so it's possible that researchers may one day find other remnants of Mesozoic life. To learn more about the possibilities, see the links below.