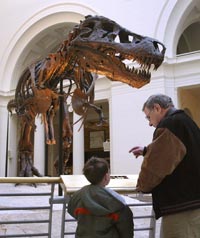 If you go to The Field Museum in Chicago, you can see Sue, the largest, most complete Tyrannosaurus rex skeleton in the world. Sue is an impressive specimen, standing more than 13 feet (3.9 meters) tall and 42 feet (12.8 meters) long. Many dinosaur fossils have missing or broken bones, but Sue is more than 90 percent complete. Sue is also a real skeleton, not a cast. With the exception of the skull, on display elsewhere in the museum, the bones you can see are the real 67-million-year-old deal.

Paleontologist Sue Hendrickson discovered the dinosaur's bones in South Dakota on Aug. 12, 1990. Since then, researchers have figured out a lot about Sue's life. In spite of breaking some ribs, Sue lived to a relatively old age for a dinosaur, at least according to signs of wear on the bones. Researchers also estimate that the dinosaur weighed 7 tons (6.4 metric tons), about as much as a male African elephant. But what scientists don't know is whether Sue was male or female.

With just about all animals that use sexual reproduction, it's pretty easy to figure out which sex is which. All you have to do is observe their behavior or take a look at their sex organs. Figuring out the sex of a dinosaur is a little tricky, though. There aren't any around today, so you can't observe their behavior. Since sex organs are made of soft tissue, they don't fossilize well. On top of that, most paleontologists believe that dinosaurs, like birds, used one opening called a cloaca for reproduction and expulsion of liquid and solid waste. So even if researchers find a dinosaur fossil with well-preserved skin, they still may not know its sex for sure.

­DNA -- a master reference for figuring out what's what -- isn't much help with dinosaurs. While you can usually tell male and female mammals apart by their X and Y chromosomes, reptiles don't follow those rules. In many reptilian species, the temperature of the egg, not the chromosomes inside it, determines sex. Plus, DNA breaks ­down during fossilization, leaving little for researchers to analyze.

But that doesn't mean figuring out the sex of a dinosaur fossil is impossible. Next, we'll take a look at some of the theories behind frills, crests and bones, and how they might shed some light on whether that T. rex is a boy or a girl. 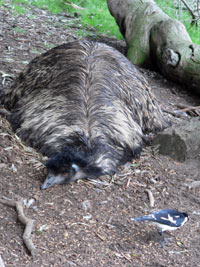 With groundbreaking discoveries like Schweitzer's and the well-preserved fossils being unearthed in places like China, it may one day be possible to make a pretty good guess about a dinosaur's sex. But for right now, it's a shot in the dark. To read more about paleontology, dinosaurs and scientific unknowns, read through the links on the next page.