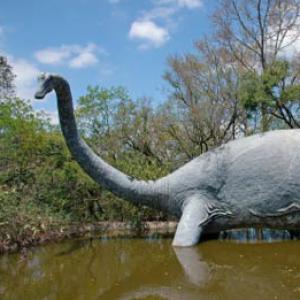 If you pick up a dinosaur picture book written before the 1970s, you'll probably see lots of swimming dinosaurs. Giant dinosaurs like Apatosaurus and Diplodocus used to be depicted as water dwellers. Their bodies were so big, scientists argued, that their legs couldn't have supported their weight on land. In this view, massive sauropods -- four-legged, herbivorous dinosaurs -- spent their lives buoyed by seas and swamps. They used their long necks to dive for aquatic plants and to raise their heads out of the water to breathe.

This theory portrayed sauropods a little more like wallowers than swimmers -- and it turned out to be wrong. In the 1950s, K.A. Kermack studied the effects that water pressure would have had on sauropods' breathing. According to his analysis, the pressure of the surrounding water would have crushed the thorax of a deeply submerged sauropod, cutting off its air supply [source: Fastovsky et al]. In the 1960s, researchers explored the fossilized remnants of an Apatosaurus habitat. They determined it to be a woodland, not a swamp [source: Rajewski].

With their long bodies and flipperlike fins, prehistoric animals like plesiosaurs and mosasaurs were definite swimmers -- but they weren't dinosaurs. Dinosaurs were, by definition, land animals. Since most land animals can swim at least a little if they suddenly find themselves in water, it seems logical that dinosaurs could, too. However, concrete evidence of this has been hard to come by.

If paleontologists find a dinosaur's body in the bottom of what used to be an ocean, that doesn't mean it died there. Predators, currents and even natural events like landslides could have moved the body to deeper water. For this reason, researchers look for trace fossils, not bones, when determining whether dinosaurs could swim. Next, we'll take a look at why finding trace fossils of a swimming dinosaur is so challenging and why partial prints offer the best clues of swimming dinosaurs.

The Prints of Swimming Dinosaurs 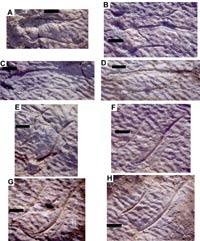 Prints from the trackway at Cameros Basin, Spain, are interpreted as the claw marks of a swimming dinosaur.
Photo Courtesy The Geological Society of America

­Trackways preserve information about dinosaurs the same way the sand does as you walk down the beach -- if you look behind you, you can see where you've been. If you stopped to pick up a sand dollar or turn over a shell, you can see that, too. But the sand doesn't do a good job of keeping up with you if you decide to go for a swim. You might see your tracks going into the water or an occasional mark where your hand or foot touched the bottom, but you won't get a clear picture like you can with your footprints on the shore.

Similarly, most of the evidence that dinosaurs could swim comes from partial footprints and incomplete trackways. In the past, researchers interpreted trackways that preserved only a quadruped's front footprints, known as the manus, as the traces of a swimming sauropod. In this interpretation, the sauropod was using its front feet to push off the bottom while its back feet floated behind. Today, some paleontologists believe such trackways are too regular and predicable to represent a swimming dinosaur. Instead, these tracks may be underprints, impressions made very deep in the ground by a massive dinosaur walking on land [source: Vila et al].

The tracks most commonly interpreted as the prints of swimming dinosaurs are erratic. They suggest the marks of an animal that was adjusting to changing currents and depths. An early example is a report by W.P. Coombs in 1980. Coombs published findings of a set of Lower Jurassic scratch marks he interpreted as theropod swim tracks in the journal Science [source: Coombs]. This started to dispel the common idea that carnivorous dinosaurs stayed away from the water, so prey could escape them by swimming.

A 50-foot (15-meter) Cretaceous Period trackway found in Cameros Basin, La Roija, Spain, shows 12 irregular prints of an animal's back feet, or pes. The prints are in rippled ground, indicating that there was a current overhead. The left prints are claw marks moving in a parallel direction, and the right prints veer off at an angle. A team led by paleontologist Rubén Ezquerra interprets these prints as those of a swimming theropod -- a bipedal, often carnivorous dinosaur -- struggling against the current [source: Ezquerra et al]. Since the prints consist only of claw marks, researchers can't tell what type of dinosaur made them.

In Wyoming, a team led by Deborah Mickelson found a set of tracks that appear to be those of a bipedal dinosaur heading into the water for a swim. The prints start out clear, then gradually become less complete as they enter deeper water. These tracks are from the Middle Jurassic Period, but it's unclear exactly which dinosaur may have made them [source: Mickelson].

Other trackway finds combine claw marks, drag marks and partial prints, adding up to the suggestion of a floating or swimming dinosaur. In 2006, a team led by Andrew C. Milner reported a large collection of tracks found in St. George, Utah. The team was able to identify the tracks -- after a fashion. Because dinosaurs had muscles, fat and skin around their bones, it can be impossible to match a set of tracks with the skeleton of the dinosaur that made them. For this reason, scientists give tracks their own names and classifications. The Utah swim tracks have been identified as Characichnos, Grallator and Eubrontes. Characichnos denotes claw marks, while Grallator and Eubrontes are the tracks of bipedal dinosaurs.

These finds relate to bipedal dinosaurs -- so far, researchers haven't reported a lot of quadruped swim tracks. This doesn't mean that quadrupeds like Apatosaurus and Diplodocus never swam, though. Clear evidence that they did may someday be found. 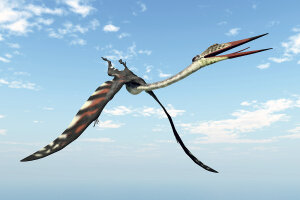 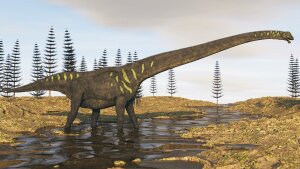 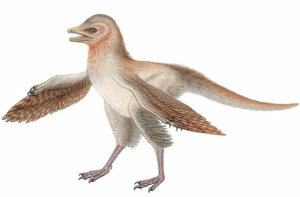