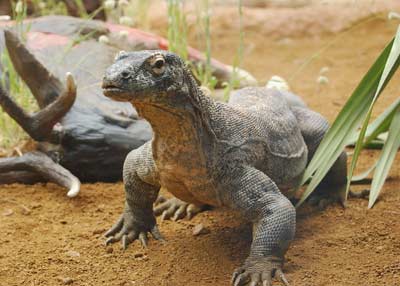 Modern lizards, like this komodo dragon at the London Zoo, have a sprawling gait.
Getty Images

Dinosaurs were a group of land animals that lived from about 230 million years ago until about 60 million years ago. This spans the era of the Earth's history known as the Mesozoic era, which includes, from most ancient to most recent, the Triassic, Jurassic and Cretaceous

periods. Dinosaurs grew in population and diversity during their time on Earth before becoming extinct at the end of the Cretaceous period.

No one knows exactly how many types of dinosaurs inhabited the planet. There are currently about 700 named species, but this probably represents a fraction of the dinosaurs that ever existed.

Dinosaurs ranged in size from immense to tiny, and they came in a range of shapes. Today's dinosaur classifications come from these differences in shape and size. Carnivorous dinosaurs were all theropods, bipedal animals with three-toed feet. Carnosaurs were a small, agile type of theropod. One of the most widely-known carnosaurs was Velociraptor, which is considerably smaller than depicted in the "Jurassic Park" films. Sauropods, on the other hand, were enormous, four-legged herbivores like Brachiosaurus, Apatosaurus and Diplodocus. Dinosaurs with armored bodies and spiny tails were ankylosaurs. Ceratopians -- like Triceratops -- had frills and horns on their heads.

But not every reptile that lived during the Mesozoic era was a dinosaur. In fact, a lot of extinct animals that people think of as dinosaurs aren't classified as dinosaurs. This is because they don't share one or more of dinosaurs' basic traits:

Dinosaurs, such as this animatronic stegosaurus shown in Walking with the Dinosaurs, had an upright gait. They held their bodies up over their legs.
WireImage

These traits keep some well-known prehistoric animals from being considered dinosaurs:

So because of their bone structure, habitat or other traits, these animals weren't technically dinosaurs. But they did leave behind same evidence that dinosaurs did -- fossils. Next, we'll look at what fossils can and can't tell us about dinosaurs' physical appearance.

The World of Dinosaurs

The earliest dinosaurs lived in a world that looked very different from the Earth we know today. Rather than being separated by expansions of ocean, the continents were packed together in a mass known as Pangea.

Dinosaurs lived for about 170 million years, and during that time, the continents gradually spread to form the shapes we recognize today. Dinosaurs continued to live on every continent -- there are even fossils buried under the ice in Antarctica.