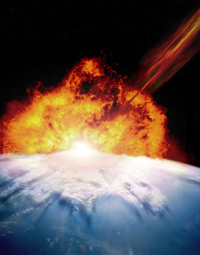 One compelling theory about the extinction of the dinosaurs is a massive asteroid impact.
Getty Images

Dinosaurs aren't the only things that died out at the K-T boundary. About 50 percent of the species on Earth became extinct. This included many other large reptiles, like pterosaurs and plesiosarus, as well as lots of plant species and marine animals. Other life forms, such as ferns, flourished by taking advantage of the sudden abundance of natural resources.

Scientists have proposed a number of theories about exactly what happened at the K-T boundary. There's not much physical evidence for some of them. For example, one theory is that dinosaurs were allergic to flower pollen -- flowering plants and bees evolved together during the late Cretaceous period. However, flowering plants existed for millions of years before the dinosaurs died out. Another theory is that mammals, which began to proliferate at the end of the Cretaceous period, ate dinosaurs' eggs. But considering the number of whole fossil egg specimens, this seems somewhat unlikely.

Then there's the Alvarez hypothesis. In 1980, Luis and Walter Alvarez proposed that comets or asteroids had hit the Earth, causing massive shock waves, debris clouds and other devastation. There's a lot of evidence to support this hypothesis. One is a layer of a mineral called iridium, which exists in many locations on the planet at depths equated with the end of the Cretaceous period. Iridium is more common in space debris than on Earth, so the huge impact of an object from space could have caused this effect.

Perhaps the biggest support for this hypothesis is the Chicxulub crater. This is a massive asteroid crater off the coast of the Yucatan peninsula. Based on measurements of sediments and analysis of the surrounding rock, scientists estimate that the asteroid that caused the crater was between 145 and 180 kilometers in diameter. This would have caused exactly the kind of devastation described in the Alvarez hypothesis. A team of three researchers even believes to have discovered the identity of the asteroid itself. Using mathematical models, the group narrowed the field to the Baptistina cluster, a group of asteroids created by a large impact beyond the orbit of Mars [source: Sky & Telescope].

According to the Alvarez theory, the extinction of the dinosaurs was extrinsic -- it came from outside of the Earth -- and catastrophic. However, other theories suggest that the mass extinction was intrinsic and gradual. One idea is that volcanoes in what is now India experienced massive eruptions just before the end of the Cretaceous. These eruptions filled the air with carbon dioxide and sulfur, changing the climate and damaging plant and animal life.

The changing face of the planet may have also played a role. As the continents moved, ocean currents would have changed the weather patterns in different parts of the world. Various forms of life may have been unable to survive these changes.

The best explanation for what happened to the dinosaurs may be a combination of intrinsic and extrinsic theories -- an asteroid impact combined with geological changes and volcanic eruptions. There are also indications that dinosaurs were becoming less diverse before the end of the Cretaceous period. But regardless of the cause, not everything on Earth died at the K-T boundary. Frogs, mollusks and crocodilians survived, and so did birds. Now, we'll take a look at the links between dinosaurs and birds.