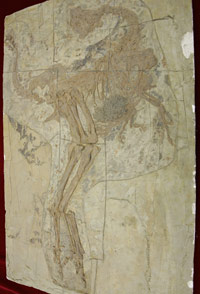 A cast of the skeleton of a birdlike dinosaur known as caudipteryx, on display in Bejing in 2007.
Getty Images

­If you have a stubborn, obsolete printer in your home or office, you might refer to it as a dinosaur. You might say the same thing about a politician whose views you consider out-of-date. Or, if you think the latest innovation is doomed to failure, you might say it's going to go the way of the dinosaur. These figures of speech come from the idea that dinosaurs are a species that died out because they couldn't keep up. They were too big, too slow, too heavy and too old to make it to modern times.

But many scientists don't see it that way at all. Instead of becoming obsolete, dinosaurs evolved into birds, which are extremely sophisticated. Not only did they become a type of animal that still exists today, they also developed a skill that very few life forms on Earth have. Only pterosaurs, insects, bats and birds can fly.

Physical evidence supports the theory that dinosaurs evolved into birds. The first thing to keep in mind is that the theory doesn't apply to every species of dinosaur, or even every subgroup of dinosaur. The dinosaurs that evolved into birds are theropods -- the three-toed dinosaurs that include Tyrannosaurus rex and Velociraptor. Ironically, these are members of the saurischian, or lizard-hipped, subgroup, rather than the ornithischian, or bird-hipped group.

Several theropod species have physical features in common with birds. These shared traits are called synapomorphies, and they include:

Today's birds also have fused finger bones at the tips of their wings, which corresponds to the claws at the end of dinosaurs' front limbs. We've discussed other similarities already, including feathers and the act of incubating eggs by sitting on a nest. Scientists have even discovered a fossilized skeleton in which the dinosaur's head is tucked under its wing, the same way a duck sleeps [source: Roach].

Of course, this isn't the only explanation for what happened to dinosaurs or for where birds came from. Opponents of the theory of evolution argue that there's no physical evidence for the transition from dinosaur to bird. Dissenting scientists contend that dinosaurs have far more in common with reptiles and are represented instead in today's reptile species, including crocodiles.

Supporters of the dinosaur-to-bird theory reply that Archaeopteryx lithographica, generally regarded as the oldest known bird, partially fills the role of the missing link. Although Archaeopteryx was a bird, it also had lizard-like features, like teeth and a bony tail. Additionally, recent discoveries of feathered fossils in China may yield more evidence that birds and dinosaurs are related.

In terms of this theory, more than 10,000 dinosaur species live today. But just as fascinating as the idea that some dinosaurs survived past the K-T boundary is the thought that scientists could create new dinosaurs. Let's take a look at how this idea, and the idea that people might interact with dinosaurs, has appeared in the media.

Some modern birds resemble theropods more clearly than robins or sparrows. These include ostriches and emus.