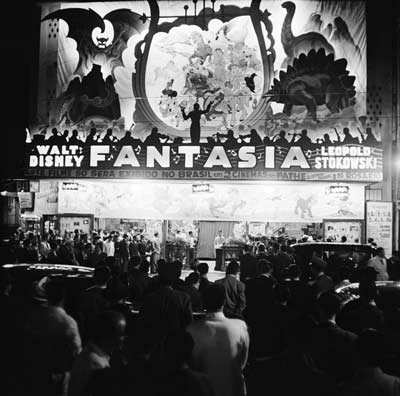 Stories about dinosaurs have existed for as long as people have been aware of the existence of trackways and fossils. Some researchers suggest that legends of behemoths and dragons come from the discovery of dinosaur bones and footprints [source: Sanz]. There are also cave paintings that appear to depict bipedal dinosaurs. One team of anthropologists believes that the !Kung, or San, of North Africa created these images based on both a fossilized skeleton and a set of footprints [source: Ellenberger].

The first dinosaur movies made their appearance shortly after the development of motion pictures. The earliest dinosaur films came out between 1910 and 1930. One was "The Lost World," which was based on a book by Sir Arthur Conan Doyle. Dinosaur cartoons made their debut around the same period. In 1940, Disney released its movie "Fantasia," which used Igor Stravinsky's "The Rite of Spring" as the score for the life and extinction of the dinosaurs.

With the exception of "Fantasia," most of these films depicted humans' encounters with dinosaurs. Characters used time travel to reach the age of the dinosaurs, or they discovered previously unknown locations in which dinosaurs survived. In today's dinosaur stories, such as "Jurassic Park," DNA plays the primary role in the face-to-face introduction between people and dinosaurs.

There are several problems with this idea:

However compelling the argument for preserved DNA might seem, cloning dinosaurs is highly unlikely.

You'll find lots of references on dinosaurs, paleontology and related topics on the next page.

In the late 1800s, two paleontologists, Othniel Charles Marsh and Edward Drinker Cope, had an intense rivalry, which became known as the Great Bone Wars. Both men published reports of new species based on partial skeletons, in part to outdo each other. In 1877, Marsh discovered part of a spine and pelvis. He named his discovery Apatosaurus ajax. Two years later, he named another incomplete skeleton Brontosaurus excelsius.

In 1903, Elmer Riggs determined that both sets of bones came from the same species. According to the International Code of Zoological Nomenclature, the first legitimate name a new species gets is the one it keeps. (You can read the code at the ICZN Web site.)

News of the name change took a while to spread for several reasons. One was that Marsh made another mistake. He placed the skull of a Camarasaurus, the inspiration for Pleo, on his Brontosaurus body, a mistake proven in the 1970s.