Browse the article Earthquakes on the Mississippi: The New Madrid Seismic Zone 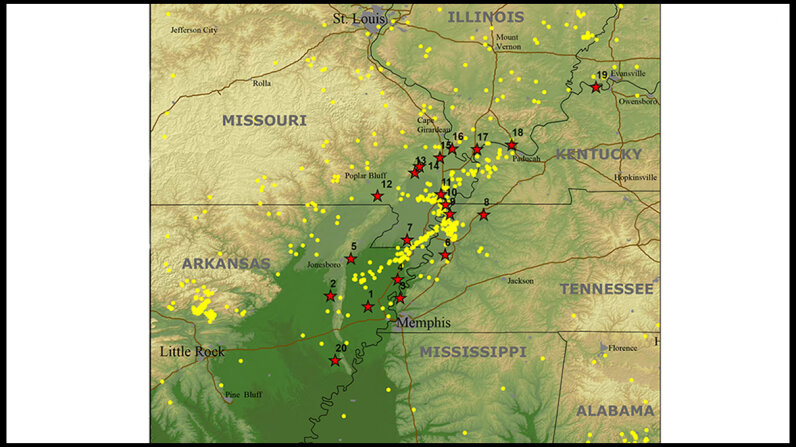 This map of the New Madrid Seismic Zone shows earthquakes with magnitudes larger than 2.5 as yellow circles. USGS

Dec. 3, 1990, was a day of anxiety for America. A prediction made by climate consultant Iben Browning held that there'd be a "50 percent chance" of a magnitude 7 earthquake rocking the nation on this date. Browning also said that, if the quake came, it'd probably originate near the city of New Madrid (pronounced "MAD-rid") in southeastern Missouri.

But there was to be no major catastrophe that day. Browning's earthquake never manifested itself. Earth scientists weren't surprised. Browning was no seismologist, and the experts had dismissed his predictions. So why did the public take them seriously? After all, most earthquakes happen along the boundaries of tectonic plates. Yet New Madrid is thousands of miles away from the closest boundary.

Despite its location, the area does have a history of large-scale earthquakes. It rests upon an old seismic zone straddling Missouri, Arkansas and Tennessee. Created millions of years ago, the sensitive spot produced massive quakes in the 19th century. Here's a brief history of the so-named New Madrid Seismic Zone.

You might be familiar with Pangea, a prehistoric supercontinent that formed when all of Earth's major landmasses merged about 300 million years ago.

Before Pangea, there was the supercontinent Rodinia, which assembled itself between 950 million and 1.3 billion years ago. Then around 750 million years ago, Rodinia started to break apart. Rifts (or faults) emerged between — and within — the various continental plates. Some 600 million years ago, a point of division called the Reelfoot Rift appeared in what's now the southeastern United States.

On occasion, rifts split continents in half. That didn't happen here: The Reelfoot Rift was stopped in its tracks. Geologically speaking, it failed — but not before it weakened part of the continental plate and created faults that still exist today.

"[It] left something of a scar in the otherwise old and relatively homogeneous crust," Susan Hough, a seismologist with the U.S. Geological Survey, says via email. The New Madrid Seismic Zone lies within the Reelfoot Rift. To earthquake researchers like Hough, this region is an enigma. As her email notes, there are a lot of other failed mid-continent rifts in North America. (An especially big one extends beneath Lake Superior.) Yet these "have not produced significant earthquakes in recent or historic times."

"So why has the Reelfoot lit up with earthquakes, but not the [others]?" asks Hough. "There are some ideas, but no definitive answer."

When a quake hits a bed of wet, loose sand, the grains and water may burst up out of the ground in a geyser. Those create "sand blows," wide cones of debris on the surface. By radiometrically dating some very old sand blows, geologists have concluded that the central Mississippi Valley underwent some huge quakes in (approximately) 1450 A.D., 900 A.D., 300 B.C.E., and 2530 B.C.E.

The next seismic event that rivaled those pre-Columbian shakeups in magnitude wouldn't come along until 1811. On Dec. 16 of that year, at about 2:15 a.m. Central Time, northeastern Arkansas became the epicenter of a quake that toppled chimneys, knocked down trees and set off landslides on the Mississippi. Two similar rumblings occurred near New Madrid on Jan. 23 and Feb. 7, 1812.

Exactly how big the 1811-1812 quakes were is unknown. On the Richter Scale, seismic events with a measured magnitude of 8.0 or more are deemed "great." They can totally level small towns near their epicenter and are 10 times stronger than 7.0 quakes, which can still do great damage.

Historically, the 1811 and 1812 New Madrid Seismic Zone earthquakes have been regarded as some of the most catastrophic that the U.S. has ever seen. A few researchers even claim they were stronger than the 7.9-magnitude San Francisco earthquake of 1906. Hough doesn't buy that assessment. "My own research says the largest earthquakes were closer to 7 than to 8," she tells us.

Could History Repeat Itself?

Many buildings in the settlement of New Madrid were washed into the Mississippi by those 1811 and 1812 quakes. Nevertheless, the city takes pride in its seismic past: Drive over for a visit and you can buy T-shirts that read "It's Our Fault."

But should modern Americans be concerned about the failed rift? In 2009, the Federal Emergency Management Agency (FEMA) calculated the potential threat of a 7.7 magnitude earthquake arising from the New Madrid Seismic Zone. The report claims that such a quake would destroy just under 715,000 buildings across an eight-state radius. It also foresees 2.5 million families losing power as well as 86,000 casualties and serious injuries.

Don't freak out just yet, though. The likelihood of that doomsday scenario is debatable. Among geologists, there are some strong differences in opinion about the zone's current activity levels. Regardless, as Hough points out, it hasn't caused excessive damage in quite a while.

And yet, things haven't worked out that way. The last regional seismic event to even approach magnitude 6 happened in 1895. Does that mean we're overdue for another major-league quake? "Short answer: nope," Hough says. There's no way to reliably predict earthquakes — something Browning failed to grasp in 1990. As Hough puts it, "[They] aren't babies. We don't know when they are due, so we can't say when they're overdue."

Now That's Interesting
The name "Rodinia" means "motherland" in Russian. Whereas Pangea was teeming with life (the first dinosaurs and mammals evolved upon it), complex land organisms didn't exist in Rodinia's time. That means the older supercontinent was effectively barren.