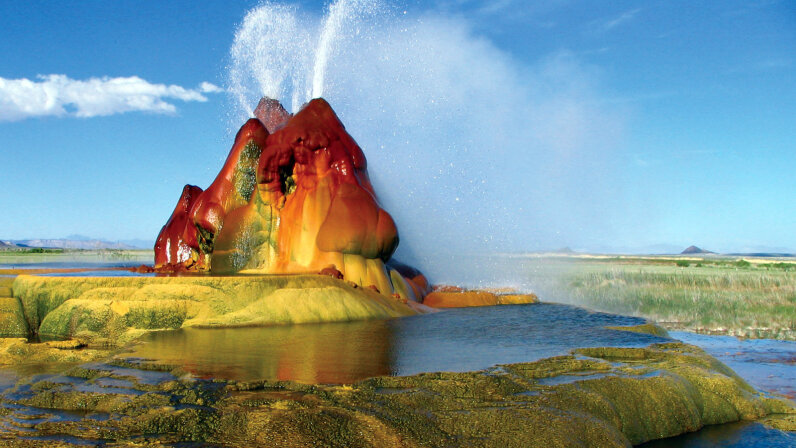 Fly Geyser has been flowing hot, mineral-rich water for more than 50 years in the Nevada desert. Wikimedia Commons

Back in the early part of the 20th century on the property that is now Fly Ranch (originally Ward's Hot Springs) near Nevada's Black Rock Desert, somebody wanted to see if there was a way to irrigate this parcel of the desert. So, they drilled a well and found water all right — lots of it. So much water, it came shooting up from the depths of the earth.

Unfortunately, though, the water was near boiling — 200 degrees Fahrenheit (93 degrees Celsius) to be exact. Water at temps that hot couldn't be used for irrigating crops, so that well was abandoned. But it continued spewing water for decades, leaving calcium carbonate deposits that slowly built up into an impressive cone.

Then, in 1964, a geothermic energy company drilled a second well just a few hundred yards away from the first. They also hit water that was 200 degrees Fahrenheit. That temp was still a problem; scalding though it was, it just wasn't hot enough for what the company needed to produce energy. So, they capped the well, but insufficiently. And soon enough, water found a way — or rather several ways — up and out, drying up the first geyser completely.

So for the past half century, this second geyser — now known as Fly Geyser — has been flowing hot, mineral-rich water, creating a stunningly bizarre and beautiful conical formation with a remarkable micro-climate in its surroundings. Today Fly Geyser is part of the Hualapai Geothermal Flats and stands about 12 feet (3.7 meters) high and 12 feet (3.7 meters) wide. It has multi-colored, thermophilic algae growing on the calcium carbide, giving it an otherworldly appearance.

Fly Geyser has always been located on private property, so it's never been open to the public or tourists. But in 2016, the Burning Man Project, (yes, the organization behind the eponymous temporary desert city) purchased Fly Ranch and now offers guided walking tours of this manmade wonder.

In the process of its environmental stewardship to protect the land, Burning Man Project also worked with Carolina Muñoz Saez, a researcher from University of California, Berkeley's Department of Earth and Planetary Science, to conduct a study of the geyser. She discovered the geyser's interior channels are lined with significant mineral deposits and the water is extremely rich in silica.

So if you're wondering how else Burning Man Project plans to use Fly Geyser, the mission statement says "soaking" is forbidden during nature walks, but they do plan to allow small groups to use some of the hot springs as part of other planned programs. Their goal, according to the website, is to "preserve the ecological integrity of the geyser and make enjoying the hot springs sustainable." We can get on board with that.

U.S. oil and gas wells produce, on average, 25 billion barrels of hot water every year. This water was once held to be an inconvenient byproduct of the industry. But new technology could take advantage of it. Just by tapping into that searing liquid, advanced geothermal energy systems could provide as much as 10 percent of the U.S. baseline electricity needs by 2050 according to an MIT study.