At one point, this whole lousy planet was covered in dinosaurs of all sizes and descriptions. These days, if we want to see evidence of dinosaurs, we can go for a walk with a pair of binoculars aimed at the trees, or just spend some time scoping out a bird feeder.

And although it's widely accepted that today's birds are avian dinosaur descendants, part of the allure of the dinos of yore is their size and variety ... and the fact that they're not around anymore. That may be true, but there are nooks and crannies all over the globe where you can find evidence of the once-kings, straight out of Deep Time. Fossilized dinosaur tracks and footprints abound.

Around 150 million years ago, during the late Jurassic, what's now central Colorado was a beach. These days you can see the tracks and skeletal remains of hundreds of ornithopod and theropod dinosaurs — including the long-necked Apatosaurus, armored Stegosaurus, and carnivorous Allosaurus — that used the beach as a freeway.

The largest dinosaur print we know about can be found at a site called Walmadany, off Australia's western coast. Twenty-one species cavorted here during the Cretaceous period, including the owner of a 5.5-foot-long (1.7-meter-long) sauropod track that belonged to an animal so immense a giraffe's face could probably only reach its withers.

Among the world's longest dinosaur trackways are those left by a Titanosaurus at the Cal Orck'o site near Sucre, Bolivia. Over millions of years what was once level ground has become a near-vertical wall.
Tony Waltham/robert harding/Getty Images

Once, nearly 70 million years ago, a baby Tyrannosaurus rex and a herd of long-necked sauropods ranging from 26-65 feet (8-20 meters) long made their way across a vast, muddy flat. Now this mudflat is a 300-foot (90-meter) vertical wall inside a rock quarry, covered with more than 5,000 tracks representing eight species and more than 450 individual dinosaurs. It's the largest collection of dinosaur tracks in the world; you can find it in Bolivia's Parque Cretácico.

The theropod tracks found in Denali National Park aren't particularly interesting in and of themselves, but thousands of herbivorous hadrosaur tracks in the park provided scientists with evidence that dinosaurs might have lived year-round in polar latitudes.

We don't generally think of dinosaurs being great parents, but it's possible Scotland's own "Dinosaur Island" has evidence of just that. The small prints left by ornithopods around 170 million years ago seem to tell the story of a parent being followed by several juveniles down the shoreline of a lake.

Check out the following images for a few more places around the globe you can visit to see dinosaur footprints.

When construction on a dam spillway began, workers discovered dozens of dinosaur tracks in Utah's Clayton Lake State Park.
Nathan Murphy/ATOMIC LLC/Flickr/CC BY-NC-ND 2.0
Footprints of a dinosaur are visible in the rocks of Sangjokam Park, South Korea, and in the nearby Goseong Dinosaur Museum.
Topic Images Inc./Getty Images
Dinosaur tracks continue to be discovered every year. These Allosaurus footprints were unearthed near Dinopark in Munchehagen, Germany, in 2015, and were found near Diplodocus footprints which paleontologists dated to the the upper Jurassic period, around 140 million years ago.
Alexander Koerner/Getty Images
Now That's Interesting
The formal study of dinosaur tracks is called ichnology.

Creative, Curious and Compelling: Our Best Stories You Might Have Missed This Week 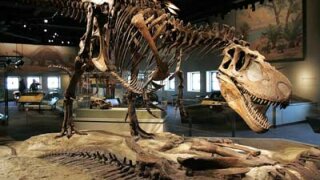 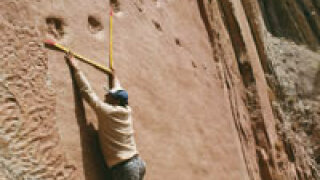 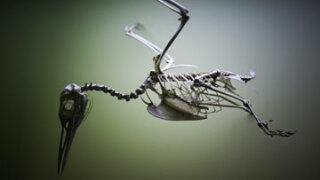