Browse the article There's a Rhino-shaped Cave in Washington State 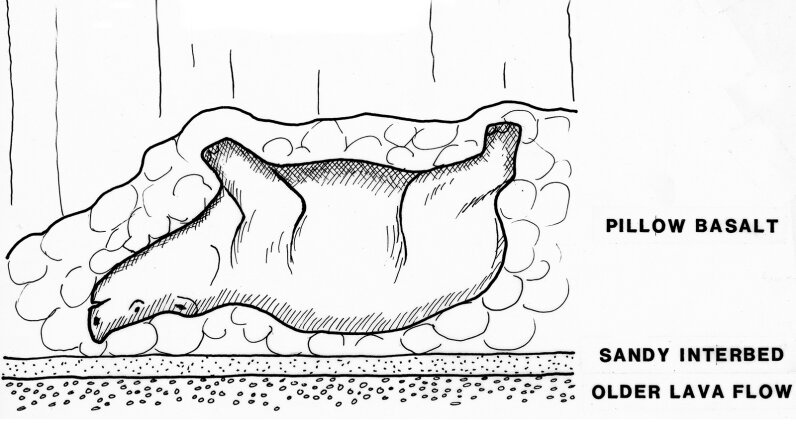 This diagram shows how the rhino was likely exposed by a glacial flood 200 feet (60 meters) above the surface of Blue Lake in Washington. Note the bubble-filled basalt from an earlier lava flow, the light-colored sandy sediments, which were once a lake bottom, and the pillow basalt surrounding the cave. Courtesy of the Burke Museum

Not all fossils are bones. (Or shells. Or teeth.) Most of us would agree that mammoth tusks and Stegosaurus spikes are pretty darn cool. And yet, the fossil record is not limited to old body parts. "Fossils" are defined as any "naturally preserved remains or traces of [life forms] that existed in the geologic past."

If you'll excuse the pun, that covers a lot of ground. A fossil can take the form of a footprint, a leaf impression or a filled-in tunnel left behind by prehistoric land beavers.

One of the strangest fossils ever discovered is actually a cave. About 15 million years ago, in eastern Washington state, a volcanic fissure eruption sent lava streaming into a shallow river or lake where a rhino happened to be wallowing.

A layer of basaltic rock formed around the beast, preserving the outline of its (well-cooked) body. For millions of years, this rhino-shaped hole in the earth lay hidden in the cliffs of Washington's Grant County, near Blue Lake, a popular hiking destination.

By the 1930s, erosion had worn a hole into one end of the subterranean creature mold, exposing it to the open air. Here's the story of how the "Blue Lake Rhino Cave" came to be — and how four Seattle rock hounds accidentally discovered it.

The great Grand Coulee and the vast Channeled Scabland, which dissect most of the Columbia Plateau, were probably formed in only a few weeks during the last Ice Age when an ice dam to the northeast was suddently washed away.
Courtesy of the Burke Museum

Only five rhino species are alive today, and none of the living five species are indigenous to North or South America. However, from about 40 to 70 million years ago, rhinos were common in North America. Some — like the barrel-chested Teleoceras — were hippo-like, semiaquatic animals. Others had wicked tusks instead of the nasal horns we see in their modern-day counterparts.

Paleontologists think the Blue Lake Rhino Cave likely formed around the corpse of a Diceratherium. This type of rhino was sexually dimorphic, meaning that males and females looked visibly different from one another. While female Diceratherium were hornless, each adult male had a pair of small horns sitting side-by-side near the tip of his snout.

The dimensions of the Blue Lake cave tell us that the Diceratherium who left it behind was about 8 feet (2.4 meters) long from snout to rear and stood a little less than 4 feet (1.2 meters) tall at the shoulder. In life, the animal probably weighed 1 ton (0.9 metric tons) or so.

Nobody knows if the creature had already died when it became entombed. However, judging by the contours of the mold, it seems the body was rather bloated. This could indicate that decomposition was already setting in. Also, the legs are pointed skyward, telling us the rhino may have been floating on its back in a state of rigor mortis.

The cave's walls are made of 15-million-year-old pillow basalt, a kind of igneous rock that normally forms when lava contacts cold water and rapidly cools down. So dead or alive, the Diceratherium must've been hanging out in a body of water during a volcanic eruption. Then the lava came pouring in.

Lava can hit temperatures of more than 1,600 degrees Fahrenheit (900 degrees Celsius). Ordinarily, this ultra-hot material would've burned right through the beast's skin, flesh and bone. But instead, the cold water converted the molten rock into a tightly packed layer of hardening pillow basalt.

The corpse eventually rotted away and most of its bones disappeared. Yet the mold that enveloped the body stayed largely intact.

Largely, but not entirely.

The rhino cave (seen here on the right) was originally located in the summer of 1935 by two couples hiking high on the cliff in search of petrified wood.
Courtesy of the Burke Museum

When you think about it, the fact that we even know this weird little cave exists is pretty amazing. Millions of years after the thing formed, flowing water carved an opening in the mold, right about where the rhino's hindquarters used to be. Yet, erosion hasn't destroyed it completely.

Today, the cave's entrance is big enough for an adult person to enter. But getting inside may prove difficult for some visitors. You see, the Blue Lake Rhino Cave is located in the face of a cliff, about 300 feet (91 meters) above the lake that shares its name.

During the summer of 1935, the Peabodys and the Frieles — two adventurous couples from Seattle — were hiking around the cliff in search of petrified wood. On their trip, the quartet happened to discover the cave; Mr. Haakon Friele had the honor of becoming the first person in recorded history to enter the prehistoric rhino mold.

Inside, he noticed a handful of fragmentary animal bone fossils, including a partial jaw. These were sent to paleobotanist George F. Beck of Central Washington University, who couldn't resist visiting the site for himself. Upon gathering more bones, he enlisted California Institute of Technology paleontologist Chester Stock to identify them.

Stock determined that the bony bits came from an extinct rhino. Soon, the scientific community realized that the cave itself was a full body cast of that very same animal, a beast who last drew breath 15 million years ago.

In 1948, a team from the University of California at Berkley heroically scaled the cliff and filled the cave with plaster, creating a three-dimensional duplicate of the interior. Also, an exact, hollow replica of the cave was put on display at Seattle's Burke Museum.

Attempting to enter the real thing can be dangerous — the surrounding cliff face is quite steep. But hey, you can always listen to the musical tribute! The Ratfish Wranglers, a science-savvy rock band led by paleoartist Ray Troll, play a fossil-tastic song called "Blue Lake Rhino."

NOW THAT'S INTERESTING
One of the largest land mammals of all time was Paraceratherium, another relative of modern rhinos. The long-necked herbivore was about 26 feet (8 meters) long and could've weighed more than 22 tons (20 metric tons).