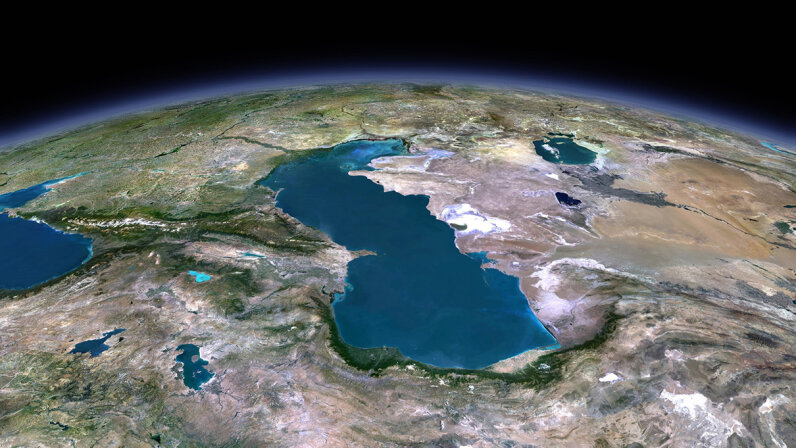 When the ancient Romans arrived at the Caspian Sea a couple thousand years ago, they thought they'd arrived at an ocean. That's because the water they encountered was salty. Nope! Sorry, Romans. Nestled amongst modern day Russia, Kazakhstan, Turkmenistan, Azerbaijan and Iran, the Caspian Sea actually is the world's largest lake. Its waters are brackish — about a third as salty as most ocean water — because, though water finds its way into it from about 130 different freshwater sources, it has no outlet. If water is going to escape the Caspian Sea, it's got to do it through evaporation.

So, it's strange that the water level of the Caspian Sea has been steadily dropping for the past couple of decades. Between 1996 and 2015, the sea has been drawn down about 3 inches (7 cm) per year — about 5 feet (1.5 meters) total. This is not the first time water levels in the Caspian have dramatically dropped, mind you. Over the course of the 20th century, changes in agricultural practices in its basin, as well as industry and damming on the Volga River (which accounts for 80 percent of the inflow of water), pulled the sea down to 3 feet (1 meter) below what it is today by the late 1970s.

But a new study published in Geophysical Research Letters finds that the Caspian Sea's current shrinking is due to the water simply evaporating away, driven by increasing average atmospheric temperatures. The researchers found that between the two time frames they studied — the years between 1979-1995 and 1996-2015 — the average yearly air temperatures directly above the sea rose about by 1.8 degrees F (1 degree C).

"From our point of view as geoscientists, it's an interesting place because it's possible to construct a sort of budget for the total amount of water that's there," said coauthor Clark Wilson, a geophysicist with the Jackson School of Geosciences at the University of Texas at Austin, in a press release. "The real control that causes it to go up and down over long periods of time is really most likely the evaporation, which is almost completely dominated by temperature."

This study is the first to provide convincing evidence that the Caspian Sea's water levels are changing due to evaporation and a changing climate rather than things like changes in river discharge or rainfall. If the trend continues, evaporation will have the biggest impact on the shallowest parts of the sea first: Much of the water at the sea's northern tip, for instance, is only about 16 feet (5 meters) deep. At this rate of evaporation, that portion will disappear within 75 years.

Cities currently located on the shore would quite quickly become landlocked as waters recede, and many of these population centers derive significant economic value from the sea, from tourism to fishing to shipping. Additionally, the Caspian Sea is home to some pretty crazy ancient animals that would be out a home if the sea disappeared. The Caspian was part of the Tethys Ocean about 300 million years ago; relatives of some of those species remain, including a whopping 90 percent of the world's caviar-producing, and endangered, sturgeon.

Parts of the Caspian seashore are popular leisure spots for people from several countries, and the sea drives the economy for many of the cities situated on it.
Alexander Demianchuk/TASS/Getty Images
Now That's Interesting
Lake Superior is the world's largest freshwater lake, with a surface area of 31,700 square miles (82,100 square kilometers). The Caspian Sea occupies a space significantly larger, at 143,200 square miles (371,000 square kilometers). For a U.S. reference, that's like comparing the sizes of Maryland and Montana.